Hysteresis, the Hawkers of snow

"A shout to the hope of living." This is one of the slogans of Hysteresis, which was born in 2014 out of a Sabadell family discussion in a Madrid xurro stall. "We saw that a social revolution was taking place, we needed politicians who were closer to us, but also closer companies and products," recalls Josep Prat, the startup’s cofounder and communications manager. Against the tide, Hysteresis began as an online store and now its magnetic ski goggles (capable of sticking to a fridge) can be found in more than 100 shops on high streets or in ski resorts. Their secret? "We give all the power to the client." Their aspiration? "To become a leader within the world of snow optics."

Prat: "We aspire to be a leader in the world of snow optics"

In pure Hawkers style, Hysteresis has a product that is "fresh, innovative, and customisable" with service that is "close, quick and interactive." The client chooses everything: the frames, the lenses and the strap. Ski goggles made to the taste of the free thinker. Multichannel and multidirectional communication is also one of the secrets of their success. With more than 30,000 followers on social media, they sell products as a genuine philosophy of life that involves "continual change, experimentation, overcoming fears and achieving one’s dreams."

Their name, taken from the Hysteresis curve, is a declaration of intentions in the magnetic revolution: "The state depends on previous history, but if the behaviour is inverted, the initial situation is not repeated."

The adventure towards snow began with three siblings (Imma, Josep and Jan) and a friend (Sergi Fernández) with initial capital of 10,000 euros. First, as self-employed workers and then as a registered company. They have never asked for a loan nor have they ever launched an investment round, although they do not rule out looking for help next season. This year’s turnover of 200,000 euros is five times what it was in 2016, breaking all their forecasts. 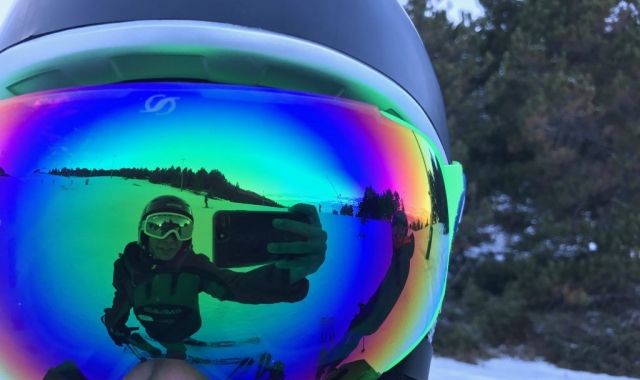 At the beginning, Hysteresis was only to be found online. Prat says that "the sales were good, the product did well but people wanted to touch it and see it in person." Physical vs online shops? Right now, the best thing is to have both. Although the startup does not have its own shops, for this Christmas their products are to be found in large stores like El Corte Inglés, Pic Negre, Pyrénées, Serra Nevada or Aramón. "We need to be in shops because they are well-established and have credibility," adds the cofounder.

They work with cutting-edge magnetic technology applied to optics. First they let snowriders try them out before selling them to the general public. Even though the competition have also now boarded the magnetic train, the cofounder is convinced that "being the first and being in physical shops as well as online" is right now the path to success.

Prat does not ski but he tries to stay connected at all times in case there is an enquiry or new order. He spends many afternoons in the warehouse, putting together boxes and goggles. "It is a complicated process," he admits. From the design stage to delivery, via the magnetic technology and the packaging. However, Prat is very proud of the "warehouse philosophy", which has allowed them to start from scratch, understand "the difficulty of starting a business," as well as learning to value "all the aspects of the team." To reap one must first sow.

The price of a Hysteresis pack is around 100 euros | Ceded

Between the 30 euros of Decathlon and the 250 euros of US brand Oakley, Hysteresis positions its products at a price of 100 euros per pack, which includes goggles, extra lenses, a box, cover, bag and tube. "Many of the large skiing companies still do not understood that being close to the customer is the key for them to continue buying," says Prat. As an example he mentions the case of a telephone company that never picks up the phone, showing that "it does not respond to the client with what it sells."

Skiing in the summer?

With a smile of satisfaction, he recalls the case of a Swedish customer who congratulated them on their product and personalised attention to the point that he promoted them among the local population. Or another case of a website that dubbed them "the Hawkers of snow". Whatever the season, their market is the whole world. In fact, they took on a salesperson from Nintendo who now not only devotes their time to selling the product in Spain and Andorra, but who is also looking into the South American market to cover the other half of the year.

Early on, they tried their luck selling sunglasses but, says Prat, "it is a highly exploited market both for physical and online sales with profits that do not compensate all the work involved." They therefore opted to specialise: "We focused on skiing because it was easier for us and because that way we could become specialists." For a brand, wanting it all is often like having nothing. The cofounder argues that "unless you are well-known, it is difficult for a company making helmets, skis, boots and goggles to find a place in the client’s mind."

"The sunglasses market is highly exploited"

As for the future, Prat points to the past. Specifically, the Polish sociologist Zygmunt Bauman and his famous theory on "liquid modernity." "We are doing business and we try to make a space in the market doing things differently from how they have been done until now. First you have to think how society changes and then you have to adapt to it," he insists. Hystheresis was born magnetic and hopes in only a few years to attract recognition among ski professionals as well as their fans. To conclude and in full election campaign mode, Prat asks for the votes of his potential clients: "We want to be your eyes, in risk and in fun, with the latest technology, thinking about how to make your life easier."

Més informació
Netflix to produce interactive content for grown-ups
Aelix Therapeutics, pay per view against AIDS
"Internet has allowed us to gather data we did not know how to process"
Avui et destaquem
El més llegit
Segueix-nos