Food and telecommunications are where most immigrant businesses begin, two sectors that cover new consumer trends and bring in customers when other shops have closed for the day

Going onto the street and seeing that old neighbourhood shops have become grocer’s shops run by foreigners is now common. Since the recession began, the urban landscape has changed and now features a fair number of stores known locally as ‘pakis’, due to their often being run by Pakistani people, offering a huge variety of products and at times when other local shops are closed.

It is nothing more than the result of migration by people from such places as Africa or Arab countries, says the member of Senior Economists in the College of Economists of Catalonia, Carlota Solé, in a session organised by her association. She also points out that it is also a sign of how Pakistani people tend to have an entrepreneurial mindset: “Many work for third parties, but a great many are willing to take on the risks of a business venture,” she adds. This community is now the second largest group of foreign residents in Barcelona and also the second largest with their own businesses.

That the Catalan capital is one of the main spots for such businesses is no accident. It is an urban area that is traditionally open to immigration, that is well-located geographically, and that offers a lot of opportunities for developing new business. These elements, in combination with the effects of globalisation and the recession, according to the sociologist and researcher from the Grup d'Estudis d'Immigració i Minories Ètniques (Gedime) in the UAB, Berta Güell, are the reason for the proliferation of pakistani-run shops in the city. This is particularly true in the neighbourhoods of Raval sud, Besòs Maresme and Vila de Gràcia, where she has focused her studies. The first two are where most Pakistani residents are to be found in Barcelona, while Raval is where most Pakistani businesses are located.

The typical Pakistani entrepreneur is a man between 21 and 30 without any previous experience in business beyond what he may have seen in his family. They are young entrepreneurs who are well educated, who have been in Barcelona between 11 and 15 years and who provide jobs for other Pakistani residents who are rarely over 30 and who have been in the Catalan capital for no more than six years, and who use their experience “to lean towards entrepreneurship.” 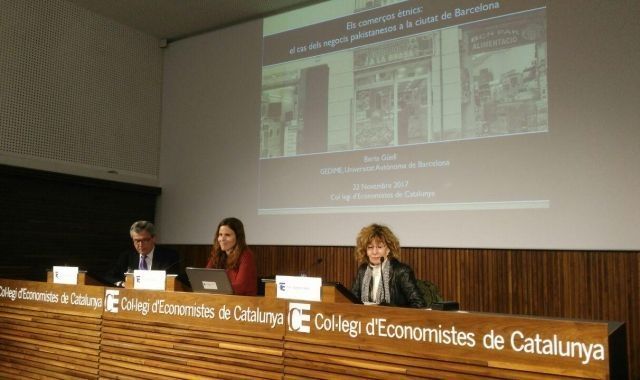 Berta Güell, in the middle, during the study’s presentation | A. Corón

Food and telecommunications are the main business areas associated with Pakistani establishments. Since 2012, the year when the number of Pakistani residents reach its height in Barcelona, the number of shops has not stopped growing.

Food shops make up 33% of all the stores covered by the sociologist in her study and most of them are in the Vila de Gràcia neighbourhood. “Looking to put as much distance as possible between them and the competition,” she points out. Some 6% of the establishments are franchises, with Suma and Condis the main chains, and a large part of the shops look for Spanish suppliers, while they are almost always in retail.

Güell: “The traders on Sant Pau street work in wholesale and supply other companies in the city and Europe”

It is a different situation in Raval sud, where the focus of the research took place. “Here is where most of the telecommunications businesses are, which make up 38% of the businesses in the study, and which are above all on Sant Pau street,” says the specialist. In fact, this street is well-known all over Europe, she says, as “its traders work in wholesale and supply other companies in the city and Europe.”

In both neighbourhoods the traders mostly come from the Punjab area, which Güell thinks is the reason why the Pakistani community helps each other so much, thereby causing the proliferation in such establishments.

Faced with growing criticism of the Pakistani shops, the researcher points out that it is not they who are displacing the local traders, but rather they are occupying the spaces the locals leave when they close: “They are businesses that are the result of a lack of a new generation to take over the local establishments that are closing.” In other words, they are a consequence of the lack of a second or third generation of locals, not the reason why the traditional shops close down.

They are also the result of a change in consumer habits. “Today everyone wants to be able to shop at any time and on any day. They know that their margin is above all at times when the supermarkets are closed, which is between 9pm and 11pm, and on Sundays,” says the sociologist, who adds that the fact that the shops are local and sell such necessary items as food helps to keep them going.

Opening the door to the job market

Women, a group that already struggles for equality with men, have even more difficulties in the case of immigrants from Arab countries. Unlike Morrocans, a community that Güell takes as a reference, it is easier for Pakistani women to find work. The proliferation of shops belonging to acquaintances and friends aid their incorporation into the job market. “The fact there is a strong business community is an advantage,” she says, “even though the work conditions are precarious.”

In these cases, the grocer’s shops or supermarket franchises are the preferred option for women. However, now some organisations in the third sector want to encourage female entrepreneurship through clothes shops, especially Pakistani dress, products that are not easily found in Barcelona.

The relationships between employees and bosses are usually hierarchical, whether they be male or female staff, and often working days are excessively long and without holidays. Nevertheless, they continue to be an accepted source of income.

Older workers in construction or hostelry see opening a shop as a way to give up more physically demanding jobs for work in which they can be their own boss. Others, however, see opening a business as the way to ensure a job for children and grandchildren in the family business.

A community of entrepreneurs on the up

Despite the clear specialisation in food and telecommunications, in recent years there has been a growing trend towards establishments selling more general items. According to the Gedime researcher, the rise in franchises has opened up the way to selling other products in demand by western shoppers. “They want to capture the locals and create businesses under well-known brands,” she says.

“Whenever they can they help each other, but in some cases they look to grow territorially and open in other neighbourhoods or outside Barcelona”

It all means that competition is on the rise. According to the expert, the Pakistani response is always cooperation and expansion: “Whenever they can they help each other, but in some cases they are also looking to grow territorially and open in other neighbourhoods or outside Barcelona. Others try to diversify, but the margin for innovation is narrow.”

Financing also takes place within the community. The first place to look for funding is among family and friends, while money from institutions and banks come second.

Més informació
A Google Analytics for retail
"Internet has allowed us to gather data we did not know how to process"
Celifast, the sensor for instantly detecting celiac disease
Avui et destaquem
El més llegit
Segueix-nos