"We are the news. Everyone is asking, even the waiters. All of them know our president is in exile," says Josep M. Ganyet on the other end of the telephone. A FaceTime conversation allows us to get his first hand impressions of the opening day of the World Economic Forum (WEF), in which he is providing tech support, "my work lets me in to experience some amazing things," he says.

The slogan of the WEF, Creating a Shared Future in a Fractured World, already gives a hint that the political situation in Catalonia would be a key issue. And that is what happened on Monday. Ganyet explains that in the news conference given by members of the International Monetary Fund with its president, Christine Lagarde, the El País correspondent Alicia González (minute 21:11 in the video) asked why the forecasts for growth in Spain had been lowered, "and the answer was due to the political situation in Catalonia. From the start we were on everyone’s lips," says Ganyet. Catalonia "hovers" over the Swiss city and the latest edition of the WEF to which "Spain has even sent its king." For the digital ethnographer, the fact that Spain and Catalonia are in the Global Risk Report 2018 is a "sign of the attention" they are getting.

As well as Catalonia, the snow was also one of the main issues of the day, as it made it hard to move between the city of Davos and Zurich, where most participants arrive. "They postponed the start of the forum for half an hour because it was taking four hours to come from Zurich due to the snow and the attendees were finding it hard to get there," says our contributor. Literally, "the snow has to be removed by spade" to get out of the house.

Despite the presence of politics and the weather at Davos, the great challenges it faces are defined by the Forum’s main issues says Ganyet. "The Forum has presented three initiatives: Global Network of Centers for 4th Industrial Revolution, Global Cybersecurity and Uplinked (Accelerator). Moreover, there are smaller sessions in which "the talk is about a fractured world and the spirit of Davos, which implies respect for differences and human rights, an inspiration for the following generation."

In the afternoon was the Crystal Awards recognising leading artists who have shown an exemplary commitment to improving the world. This year, the prizewinners were the actress Cate Blanchett, the singer Sir Elton John and the actor Shah Rukh Khan. Blanchett got a prize for her work helping refugees, and the Bollywood actor got one for the Meer Foundation NGO, which helps women who are attacked with acid, "he made a very interesting observation on the beauty of actors and the dignity of women, an emotional reflection.” 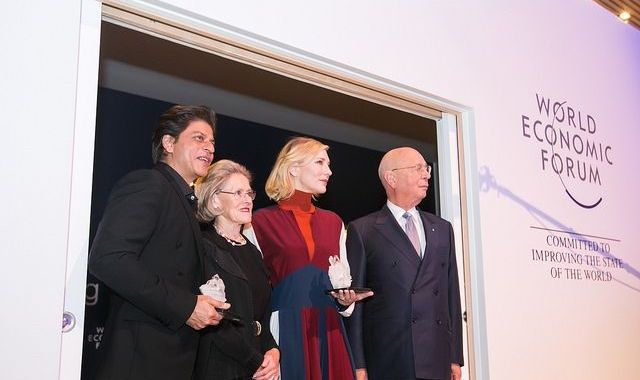 And, lastly, Elton John "who literally said 'I was a bad person for a long time until I began helping people with AIDS.’ According to him, when we lose our shame is when we begin winning, the key is to work with science and treat people equally and with respect."

"Ah! And people don’t know about the Open Forum, an auditorium open to the public, who can enter whenever they like to listen to the gurus of science and technology. There are very interesting sessions, apart from Trump, like the one talking about the culture of the selfie, for example." Moreover, Ganyet reminds us that the sessions can be followed on Twitter live, Periscope, Facebook live, Youtube live and from the WEF’s official website, as can be seen from the following links.