The founder of the Cyborg Foundation and the Transpecies Society, Neil Harbisson argues for modifying humans before trying to change the planet

Neil Harbisson (London, 1984) is the first person in the world to be recognised as a cyborg. The son of an Irish father and a Catalan-German mother, he managed to overcome achromatopsia (total colour blindness) with an antenna that is part of his body and that allows him to "listen to colours". A real case of synesthesia. After a number of struggles with the authorities, he got the right for his new organ to appear on his passport photo in 2004. His story has since gone viral, from Totnes in the UK to around the world. He is the founder of the Cyborg Foundation and the Transpecies Society, and he works with the Celler de Can Roca. VIA Empresa interviewed Harbisson during the Cornellà Creació Fòrum to find out firsthand how technology has changed his life. "I increasingly feel less human," he confesses.

What’s the first thing you think when they call you the first cyborg?

I think, why is that important? It is quite irrelevant... I had to renew my passport but they wouldn’t let me because they said nothing electronic could appear in the photo. I told them it was part of my body, which at first they refused to accept. After a long battle, it was finally accepted as an organ, which is the first time an electronic device has been recognised as part of a cyborg. Journalists used this for their headlines, and at heart it is a little sensationalist. Perhaps it is important, but that was never my objective and the word cyborg was not even part of my vocabulary. These days I am getting more used to it.

Why has it been so hard to come this far?

In 2014 the same thing happened when I had to renew my passport. I wasn’t even a precedent for myself. In general, governments lag way behind in terms of technology. It seems as if politicians do not understand much of what is going on and they talk about technology as something of the future when it is of the past. Those people born in 2000 are already adults and in the 2020s there will be politicians born in this century but with another mentality.

Beyond the term synesthesia, what does it mean to hear colours?

It is a way of simplifying it. This sense organ allows me to detect a vibration inside the bone of the cranium that is turned into an internal sound. Each colour has its own vibration, so even if I was deaf I could still perceive it. A new sense and a new organ. I can also hear infrared and ultraviolet, which are invisible to the human eye.

"Cyborg art is like post-art in which the artist, the work, the space and the public are one and the same"

I didn’t want to join myself to artificial intelligence (AI) because then the antenna would have told me the colour. I wanted to sense them and recognise them. That is why I have an artificial sense (AS) and while the technology allows me to receive the vibration of the colours, it is my brain that creates the intelligence to identify them. It was a long time before I could tell them apart. In the future we will see more AS projects than those based on AI.

You make art with the colours from an artificial sense.

It is the art of creating your senses, your organs and your perception of reality. It is about an artistic movement that need not do anything else. Cyborg art is like post-art in which the artist, the work, the space and the public are one and the same. No one other than me can experience it. It is classified as perceptionism because the aim is to create a perception.

Does bringing the future forward generate rejection or acceptance?

Both things. Journalists wanted to classify it as the solution to a problem. They tried to change the story so as to provide the news that technology can help us. But I have always seen it in an artistic context. When they first started, photography or cinema were not considered art but rather as technology with a reason behind them. I imagine the same thing will happen with cyborg art.

You insist that “all humans are in transition to becoming cyborgs.”

It depends on how you define cyborg. Moon Ribas and I went to talk to Manfred Clynes, who invented the word that has ended up with quite a flexible definition. His answer included riding a bicycle because in humans technology alters the sense of balance. He thus concluded that we are all cyborgs. I would say that in the future we will be able to decide whether we are cyborgs or not and which senses or organs we want as a species. Right now it is hard... But we are already starting to print out new 3D organs and to modify ourselves genetically. But there will also be people who decide not to do that.

You define yourself as transpecies.

I increasingly feel less human and that doesn’t mean I feel superior or inferior to everyone else. For a long time I hid it because people do not like it. But, last year we decided that it wasn’t a problem because we live with plenty of other species that are not human. Basically, I do not feel 100% human because the definition does not include the antenna organ that is part of my body or being able to perceive infrared and ultraviolet light. So, if I have senses and organs that are not traditionally in the human species, the definition of that species does not entirely describe me. That’s why I consider myself transpecies. Having the association has shown us that there are a lot of people who do not feel 100% human and who feel trapped in a human body. They have joined with technology and that has changed their sense of identity. 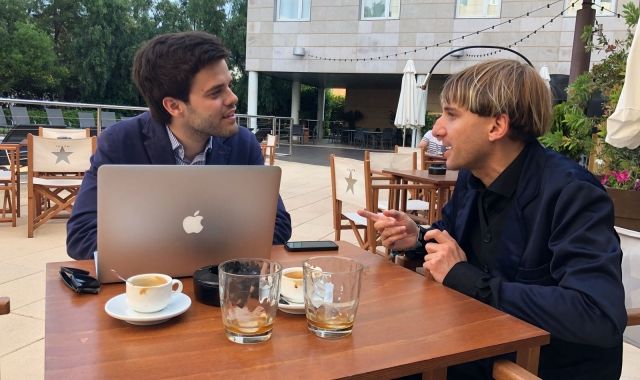 Does technology reach where biology doesn’t?

Feeling that technology is part of your identity is something new that 50 or 100 years ago would have been very strange. You can see that through the language. At the turn of the century people would say of their mobiles "I’m running out of battery." Indirectly, you are the mobile. It is the same thing with "we caught a plane" and "we flew.” The different ways of speaking that change with the times show us that technology is part of our identity. Parallels can be drawn between transpecies people and transgender people. It begins with how you identify yourself and later you can put it into practise if you want.

Society has to begin to be more accepting of different identities. What we now understand as diversity will be much more exaggerated in a few decades. It is much more than we imagine now. We have to be prepared to be able to decide which species we want to be and the creation of a new diversity without discriminating against anyone.

Fiction has also played with this idea... In film we have Blade Runner, Terminator or Matrix.

Manfred Clynes complained a lot about Terminator and how they used his term for something that he had never defined. The first definition describes a human who is transformed so as to be able to survive in space. Moon and I included planet Earth in his definition. We have tried to change the planet to survive but we should modify ourselves. Some examples are having nocturnal vision instead of lights at night or regulating our temperature and not changing that of the planet. Terminator was something else, a monstrous being and Clynes was on the verge of going to court over it but he saw that you have no power over how words evolve. Cyborg is a sense of identity with technology, but you do not need an implant to feel like a cyborg.

What do you need to feel like a cyborg?

There are people who feel that their mobile is part of their identity, while others don’t. There are people who have implants in their bodies for cybernetic reasons, while other don’t but they still feel like a cyborg. It is the same thing that happens with gender, which has nothing to do with the body you have but rather your identity. It is more profound.

What is the mission of the Cyborg Foundation and the Transpecies Society?

The Transpecies Society is the active and social part of the Cyborg Foundation, which is a universal platform that includes the rights of cyborgs. You can become a member of the Transpecies Society, which is an association in Barcelona where we create senses and organs as a community. We call that the New Sense Lab and every Friday we meet up with people from different disciplines: electronic engineers, designers, doctors. A degree for designing new organs, new senses or species still does not exist, but those for graphic design or designing products do...

"In Barcelona we create senses and organs as a community"

What do you create in the laboratory?

The aim is to reveal the reality that surrounds us and that we cannot perceive. It is neither virtual nor augmented reality, but rather revealed reality. It is a new way of exploring the world and revealing realities that surround us but that the human body cannot perceive unless it unites with technology. Our bad fortune is that we have been born after all the continents have been discovered, all the mountains climbed and all the oceans crossed... The only way of rediscovering the world is to add new senses, such as perceiving ultraviolet light.

Or use the "Toca Plats" with Jordi Roca from the Celler de Can Roca restaurant.

The Roca brothers are very creative. We created the chromophone, a transparent moving device with a sensor that translates the colour of food into sound and the challenge is for the diner to eat music. A dish can look nice, but sound bad, or the other way round. The "Toca Plats" is connected to your mobile and it allows you to make songs and listen to dishes. It’s sonochromatic gastronomy, a new way of listening to cuisine. A Lady Gaga song could be a salad.

What new synesthesia do you want to produce in the next 10 years?

I now want to get a circular thermic organ to sense the passage of time. It will go between my skin and bone and in 24 hours will circle my head. The temperature will change from one extreme to the other throughout the day and I will know what time it is depending on the warmth. Once I’ve got used to it, I will be able to modify the speed at which the warmth turns in orbit and thus change my perception of time. I want to put Einstein’s theory into practice and see if I can create illusions of time by deciding how long I want this interview to last or in 10 years’ time having the perception that more than 10 years have gone by. Whether the physics will go along with it remains to be seen.