"In Goldman Sachs there are physicists where before there were secretaries"

The Columbia University professor and Prince of Asturias prizewinner, Saskia Sassen, analyses the power of intermediaries in global cities

Saskia Sassen (The Hague, 1949) is a leading figure in the social sciences. Born in the Netherlands, she is a great fan of Argentina and a New York resident. She is also a professor of sociology at Columbia University, winner of the Prince of Asturias Prize in 2013 and a specialist in many areas, from urbanism, to globalization, to immigration... In fact, she was the first to define the concept of the global city. The Fòrum Cornellà Creació invited Sassen to Barcelona to share a stage with the architect Luis Vidal, and she took advantage of it to also meet mayor Ada Colau, who she has known for years.

In the first of the eight books she has written, she was taken for a man, because of her name and the subject matter of economics. She has a strong vocation for teaching, she never stops smiling (often ironically), and she says that when she speaks it sounds like she is singing tango. "I do not hide what I think," she says.

Sociology has contributed what the microeconomy left out and has adopted it. The micro is the western modality that does not manage to capture high finance. It was once dominant but no longer, only in universities. Its complex methodology is partial and incomplete. When there were still national economies, the microeconomy and sociology worked better than now. I like this image: if you look at a large company, it is the physicists who are producing the tools to make large finance work. We have to think about changing the content.

Is it all now about physicists, finances and global cities...

I want to portray this historic moment for you. I began working on the global city in the 1970s and ‘80s. At that time, Paris, London, Tokyo and New York were failing and were poor because large companies did not need cities. All the experts gave up on them. However, the significant change came when a new type of activity installed itself in global cities. Internationalism was boosted by deregulation and privatisation. Opening up to a global world means that companies need specialised knowledge to be able to operate in each country. Things change: new nationalities, colonies become independent countries... The imperialism of 30 or 40 years ago is very different from what it is today.

The power of intermediaries.

A company has to know what the rules of the game are in each country before going there. Yet, it cannot produce this knowledge internally, so the new economy demands having access to a series of experts that appear in the large cities. They talk about accounting in Mongolia, Australia’s laws, or how to invest in Germany. The intermediary sector emerges, highly specialised, which never loses and which accumulates wealth. They sell their services and leave a mark on the urban space. It is the time of global cities, digitalisation and the economy of intermediation in which companies, universities or institutions buy the time of specialists in order to operate internationally. I came to understand it thanks to some Dominican friends who cleaned large buildings on Wall Street and who let me go with them one day to check all the nationalities there were inside. The intermediaries have the power and if the project fails they are not to blame. Their most elemental and visual form are mergers and acquisitions. A modality was invented in which they did not lose and this intermediary world ironically caused the rebirth of the cities. 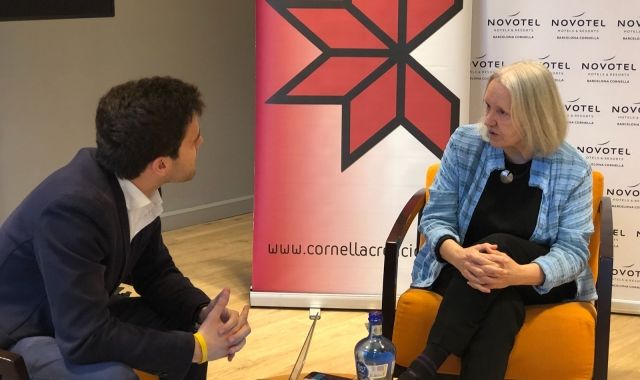 Saskia Sassen during the interview with VIA Empresa | Ceded.

The two exist but the mistake is thinking that the global looks outwards. In truth, it moves inwards. The intermediary sector tells a small company that it can be global and takes away its extra value from being local. The most admirable part is its specialised knowledge. Traditional banking is retail and it is interested in things going well for its clients but high finance is an extractive sector. In New York, they are all branches of large banks and if you go into Goldman Sachs there are physicists where once there were secretaries.

Who owns the city?

The intermediary sector reevaluates the urban space. Knowledge needs a large amount of materials and spaces and at the same time there are people who have to live, who want to go to restaurants and buy good flats... Thus large numbers of the lower middle classes are expelled. In fact, the general middle class no longer exists in large cities and instead there is a lower middle class and a wealthy middle class. The 1% we have always had does not matter but rather the 30% or 40% that is very rich while the rest get poorer. A flat where once a family with three children would live is now just for one 25-year-old by himself. The space is representative and that is an occupation so they can buy it.

"Many local governments are getting poorer"

And the city of the citizens?

Part of this 30% or 40% is the citizenry with more influence. We want firefighters, teachers, police, nurses all nearby. But, they need to be subsidised and who pays for that? The public, the workplace or the private part of the university. Who has forced this need? The private sectors. It is a tough imbalance for the cities.

The private sector creates the need and not the other way round?

The landscape is complex. Large companies call for lower taxes in cities so that they can enjoy their profits. What is the result? Many local governments are getting poorer. When you add the privatisation of more spaces, then income starts falling.... Ada Colau began her fight against franchises because they had done away with small companies that worked very well. It is an extractive sector.

"Do I really need a multinational to get a cup of coffee in my neighbourhood?"

Does the possibility of relocating exist.

Yes. Should we be thinking that we can relocate? My rhetorical question is: do I really need a multinational to get a cup of coffee in my neighbourhood? No. But I do need a multinational to buy a computer. We can relocate all those sectors that we do not need and that have been taken over by multinationals. Franchises are a disaster in Barcelona, aren’t they? If we want to recover the city we have lost for the public then we have to enter the fight. However, not everything can be relocated and the recovery has its own way of gentrification.

Perhaps, but that is a strong word. I see modalities. When the large corporations arrive and the new invisible economy gradually installs itself, the urban experts do not understand. It is an extractive modality. These companies that don’t care a fig about the city and see it as a tool. For the old oligarchies, the city was their space of representation to a wider world. However, today’s elites feel represented by the large financiers. Right now is marked by urban terrain for private companies and the lower middle class that has lost so much but that has the possibility of mobilising.

"No system of power lasts forever"

It is a great question and no one really knows the answer. History tells us that no system of power lasts forever. What matters to me is relocating because it is a first step towards solidarity and understanding. We have to begin tying together the middle classes that now have less wealth, the poor, the immigrants… It is also important to develop the city’s ethics and to think about what it means in a space that inevitably has inequalities.

Més informació
"The same technology can save the Titanic or get you an abortion in China"
Industry 4.0 is written in German
When banks ignore women
Avui et destaquem
El més llegit
Segueix-nos