Industry 4.0 is written in German

"Machines have to be built to build machines, what machines do not do is make machines" is one of M. Rajoy masterful phrases that defines how concerned the Spanish prime minister is about the country’s industry. It also says something about his project to ensure that Spain does not end up at the back of the queue in the current industrial revolution. In previous iterations, Spain has always lagged behind, with Catalonia and the Basque Country saving the day, and they are now also attempting to lead the way  in southern Europe in Industry 4.0. An example is the Advanced Factories fair being held in the Catalan capital these days, and that as the guest of honour this year has chosen Germany, the artifice of the industry 4.0 concept.

Germany, it is always Germany. There are various definitions –the fourth industrial revolution, cyber-industry, integrated industry, connected factories, IoIT or smart industry, as the Scandinavians prefer to call it-, but the origin of the term industry 4.0 was coined in Europe’s main economy. If a German does it, no doubt it must be good quality (with dieselgate apart). But, where does the concept actually come from? 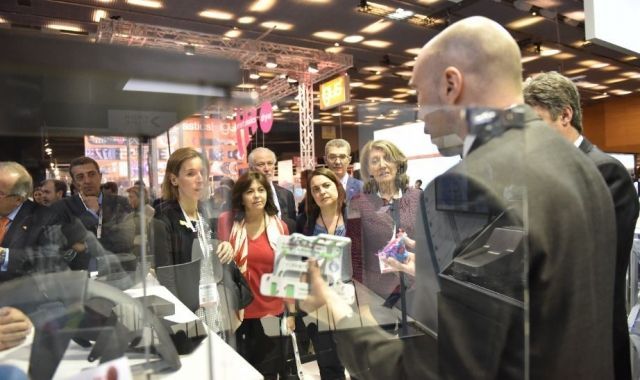 The Plattform Industrie 4.0 was set up in April 2013 by three private associations for digitalising industry: BITKOM (Federal Association for Information Technology, Telecommunications and New Media), VDMA (German Machinery and Plant Engineering Association) and ZVEI (The Electrical and Electronic Manufacturers' Association).

At the same time, the Federal Ministry of Education and Research published Recommendations for implementing the strategic initiative INDUSTRIE 4.0. The study’s subhead said it all: “Securing the future of the German manufacturing industry”.

Schulz: "The federal government gives the platform another dimension and internationalises it, today the concept of Industry 4.0 is universal"

In April 2015, the finance and education ministries took up the initiative. "The government gives the platform another dimension, establishing the internationalisation of the project and cooperation with China, Japan, the United States and other European countries. That would not have been possible for the organisations that began it," he points out.

The German government had six priorities: standardisation and norms, research and innovation, the legal framework, security, education and platform economies. From 2014 until today, the expert says work has gone ahead in the first three main areas –R&D, legal, business models, standards and data ownership. From 2018, the focus will be on providing support to SMEs, education, networks and the cloud, digital platforms, autonomous systems and deep learning.

The Plattform’s roadmap covers the period from 2021 to 2023, with the mass adoption of industry 4.0 on behalf of the market, in which the focus will be on digital business models and the platform economy.

The result is that German industry has welcomed the initiative with open arms. Small, medium and large companies in all sectors have joined the Bundestag’s initiative. And not only that. The governmental boost has helped internationalise the concept of industry 4.0: "Today industry is stronger, and not only German industry." In fact, in the Plattform there are companies that operate in Germany, but who do not have to be there: GE, IBM, Microsoft, HP, etc.

Reflections from the factory

On the Plattform website there is a map with more than 300 successful cases and examples of applying technology to factories. Some of the participants at the Advanced Factories fair told VIA Empresa their views of Industry 4.0.

Trumpf provides solutions for manufacturing metals. Internally, and without realising it, it began to apply the industry 4.0 concept to its factories: "How to make sure these innovations also benefit our clients?" asks Adriana Menjón, the company spokesperson. Internal innovation as a business model.

"Our clients, especially SMEs, are not sure what industry 4.0 is, which is why we also make the effort to explain the concept in everyday terms: explaining what tools there are and which solutions we propose," says the spokeswoman.

García: "Industry 4.0 facilitates the access of SMEs to robotics and the automation of processes"

Industry 4.0 is the name, the marketing, for the possibilities of digitalisation applied to factories. This revolution tries to spread the innovation that, most often, used to remain within large companies. According to the spokesman for Schunk, a company devoted to automation, Javier García, "industry 4.0 facilitates the access of SMEs to robotics and the automation of processes that until now they did not have."

Industry 4.0 is the digitalisation of SMEs, says García: "Years ago, only large producing companies had access to automation, which is why car manufacturing led the way." Today, any producer might be interested in having a robot, preventive maintenance sensors or so many other technologies.

The Plattform Industrie 4.0 has helped a lot of German companies to the point that "the large firms explain to them the technological possibilities they offer." Obviously, it is not only about marketing, but "the technology is also easier to apply these days, access to knowledge is also easier," he concludes.

Saving Germany, and the world with it

The German chancellor, Angela Merkel, said in a speech in October 2014,  addressing the 8th National IT Summit: “Germany has the opportunity to lead the way in industry 4.0.”

During the height of the recession, Merkel knew that the German (and European) market could not catch other economies in sectors that were already mature, such as the production of chips. In 2013, in the Hamburg IT summit, Merkel said: "In connecting digital technology with industrial and logistical production -Industry 4.0- Germany has the chance to move forward."

The chancellor made it clear that in global competitiveness in the sector, Europe continues a step behind the United States and China. In 2009, Germany industry fell to earth and only contributed 27.8% to German GDP. When Merkel said these words, German industry had gone back to accounting for 30.1%.

In Germany they say that “wenn Volkswagen niest, dann hat Wolfsburg die Grippe”, when Volkswagen sneezes, Wolfsburg has the flu. It could therefore also be said that “when Germany sneezes, Europe has the flu.” Merkel knows that German industry had to be saved –and the rest will work out.