The anti-Trump arrives in Davos

From the Swiss Forum Josep M. Ganyet highlights the firm commitment of the Indian prime minister, Narendra Modi, to fighting climate change in a world that questions the power of technology

The second day in Davos and Josep M. Ganyet is still there, in the trenches. On Monday evening we spoke on Skype, which is easier and more fluid. Also, each of us knew what we wanted: he, to bring together the best of the day; VIA Empresa, to get the best statement: "We have the anti-Trump here, the Indian prime minister Narendra Modi is being put forward as an alternative," our contributor starts bluntly. Bingo! A place to begin.

Narendra Modi’s firm commitment to ecology clashes with Donald Trump’s abrupt dismissal of what, for most of us, is a global problem. "Modi has called on countries to make climate change a priority and he presented plans for the production of clean energy in India. For me, he is the number one figure of the day," says the digital ethnographer.

The second personality of the day that Ganyet highlights, is the actress Cate Blanchett, who on Monday received a prize in the Crystal Awards. And the actress went on to give a news conference after receiving the distinction. "Blanchett was very honest when talking about matters of globalisation, in her role as an ambassador for ACNUR. Let’s say that she cast off the role of idol of the masses and showed herself to be a normal person. I liked what she said a lot, she was very pointed." On the other hand, the actor Shah Rukh Khan did not convince Ganyet: "Rukh Khan was too progressive and feminist, and he gave off a feeling of disguised maleness. And Elton John yesterday (talking on Monday) did not stay either for the inaugural concert nor to see or greet anyone," he said. 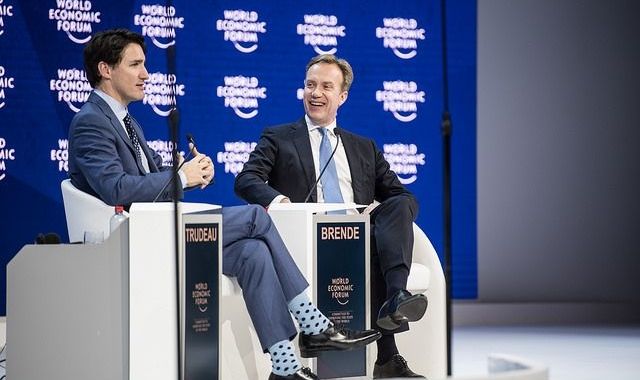 The third relevant personage of the day is Justin Trudeau, the prime minister of Canada, who spoke about business responsibility and the role of women, while wearing bright multi-coloured socks. "He put on a show with the fun socks, but he also gave a real feminist speech, there is gender parity in his government and he sees gender equality as a business opportunity, in fact he presented the profits that a greater role for women would mean for the Canadian economy," says Ganyet.

Among the numerous sessions attended by Ganyet, the one he highlights above the rest is In Technology We Trust?, which included the participation of Marc R. Benioff, CEO of Sales Force; Sir Martin Sorrell, CEO and founder of WPP; Ruth Porat, CEO of Alphabet; Andrew R. Sorkin, columnist for The New York Times; Dara Khosrowshahi, CEO of Uber; and the activist Rachel Botsman.

The speakers reflected on the influence of industries, institutions and innovation on the future digital economy, "but what happens when the technology brings a murderer to your door?" posits Ganyet. Botsman, author of Who Can You Trust?  explained the case of an Uber driver in Michigan (United States) who killed six people and wounded another two after shooting them at random. "Who is to blame for that? The murderer or the technology? What do we do when the technology brings a murderer to our home?” According to Botsman, the technology is the great challenge, as it is part of the solutions we may find." Ganyet says that Khosrowshahi was left open-mouthed by the anecdote. We were too.