Lladó: "Every day is a work of art for creating new relationships"

Jaime Lladó (Sant Feliu de Guíxols, 1954) is member and director general of Dale Carnegie in Spain. Carnegie was the surname of the US businessman who more than 100 years ago revolutionised personal and professional development with different courses and the genuine literary hit, How to Win Friends and Influence People. Today, the company has more than 2,700 professional instructors and provides Carnegie courses in 25 languages and in over 80 countries around the world. Lladó discovered Carnegie when he was just 15, and he has a long career as a consultant, headhunter and developer of teams, and is above all a specialist in efficient communication, human relationships and leadership. He is also a teacher at the Esade business school in development of professional careers. “Every day is a work of art for creating new relationships,” he argues.

When did you discover Dale Carnegie?

I learnt about him from my father, who was someone who read a lot and who showed Dale Carnegie's book to my brother and I. He said it had helped him a lot. I heard about Carnegie at home from the age of 15 because of the importance he gave to relationships with others, and how we relate to others can be the key to success in our lives.

You come from the banking and consulting sector. What are the main business lessons you've learned?

"We always talk about attitude, but the most important thing is mentality"

A question of attitude.

Totally. But not only attitude, but rather mentality. The Ancient Greeks complained that young people did not respect their elders and they didn't know where they would end up... We always talk about attitude, but the most important thing is mentality.

We are dedicated to developing social intelligence skills. That is what it's called now... Not long ago they were relationship, communication or leadership skills. It's been proven: most of what is positive or negative that is absorbed by our energy is relationships with others. The more skilled we are when it comes to relating to others, the more success we will have! That is what Dale Carnegie discovered over 100 years ago developing a series of methodologies to help people gain skills. We don't impart knowledge in our courses, but rather skills. Few people have learned to ride a bike reading physics books! You learn to ride a bike when someone helps you to have faith in yourself and you stay upright the more you pedal. Here we work above all on the 30 key skills you need to have and master.

Respecting the opinion of others, disagreeing without offending, making others feel important, taking the initiative without upsetting others, correcting someone appropriately, smiling... A lot of people know that smiling is important but we're not aware of just how important it is. We can choose whether to smile or not when ordering a coffee. And if we choose to do so, we'll create a different relationship with the waiter.

It reminds me of Howard Gardner's theory of multiple intelligences.

Does technology isolate us or help us to form relationships with others?

It depends on us to find the mental moment to be with ourselves. But, it would be like asking a parent when they educate their children, as they would tell you always. Doing and letting it happen. We are immersed in a frantic world and now we hear a lot about mindfulness or resetting. We try to make companies provide a space where people can have a moment to reunite with themselves.

Do we have full relationships in the digital environment?

All improvement processes go through a stage of old needs with new techniques. We see new technology more as a threat than a help. People of my age prefer to call on the phone, but young people are assimilating new technology. Not long ago we did a session on artificial intelligence versus social intelligence. AI is evolving in a spectacular and worrying way. The role remaining to people is what machines cannot do: working with emotions. Why are machines capable of generating conversations? They are concerned for you and want you to feel good. The skills that will be needed in the future are not techniques but rather relationships between people.

How would you define coaching?

In a utilitarian sense. Utilising others, situations... Even ways of persuading for one's own benefit but not in a genuine way and not always looking for the most important thing: respecting others. There are many great professionals with great sensibilities in the world of coaching, but we want you to internalise the skills. 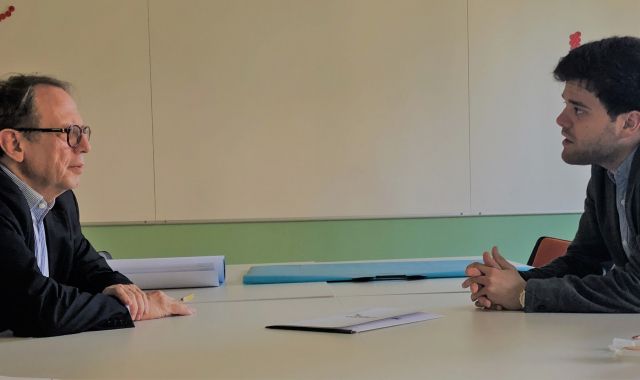 Jaime Lladó and Víctor Costa during the interview in Barcelona. | Ceded

Is that an art or a science?

Art. If you want to paint a flower you need an artistic tone. But, you also need a paintbrush, oil paints, and pigments with certain characteristics. At Dale Carnegie we teach techniques for becoming an artist. Can you explain what you do to hook up with someone?

I suppose hooking up...

Is there a technique? Everyone has their own. We are certainly talking about having a conversation, being friendly, showing the best of yourself... But, everyone does it in their own way and there is an art to it. We provide tools for you to become an artist of interpersonal relationships.

Carnegie's best known work is How to Make Friends and Influence People.

How to win friends is making friends. The concept of influencing is not as aggressive in the United Kingdom as it is in Spain. The key to Carnegie's work is being genuine, respecting others, and being sensitive. That is just about all that's needed. Marc Márquez is a great motorcycle racer because he's very sensitive. He's capable of knowing what is happening to the motorbike at 300 kilometres per hour and then making decisions. There are people who know how to realise how others are feeling and what Carnegie wants is for you to be skilled at that and act accordingly.

The art of empathy.

Being able to empathise and putting yourself in one place or another. In order to be understood we have to try to understand others.

Why is influencing different in Spain than in the UK?

Influencing in Spain has a negative sense, but wiliness is seen sympathetically. Yet, in England influencing has a positive sense and wiliness is deplorable. It's a cultural thing. Nevertheless, we spend all day influencing others and selling them our ideas and opinions.

Carnegie wrote How to Stop Worrying and Start Living. What worries us in the 21st century and how can we overcome it?

We often have many anxieties that do not appear by themselves. Yesterday, I was with human resources executives who suffered a lot when they had to speak in public. Why? Stage fright. We have to control stress, even if we can't avoid it. You have to be very brave to learn and realise that anxiety is not worth it... We talk about putting stress into perspective.

"Influencing in Spain has a negative sense, but wiliness is seen sympathetically"

Carnegie's third great book was The Quick and Easy Way to Effective Speaking.

Being capable of speaking in public shows many things: self-confidence, clear ideas, capacity for communication, connection with those listening to you, reducing the tension it brings... Speaking in public is not mundane. The important thing is not doing it in itself, but what it implies. You have to discover your own style. We only work with trainers who are concerned with the participant, not with trainers who only explain what they know.

“Entrepreneurs are not comfortable talking about emotions,” said Ferran Ramon-Cortés in an interview with VIA Empresa.

Yes. Everything you are is communication... It's impossible not to communicate in this world. We are educated in logic and it's hard for us to talk about emotions, but that will soon change. Nowadays there is a lot of talk about values in the business world and if you cannot move among emotions well, you'll dismiss it as nonsense.

Twenty years ago there would have been a subject called emotional education. Now, though, we do emotional education across all the subjects. I'm dedicated to developing professional careers and I remember a student asking me one day in class whether her CV was good enough for the market. I told her to ask her classmates whether they would take her on without looking at it. It doesn't depend so much on your studies but how you use them to do things. What you know is not as important as how you apply it. There are parents who educate their children and there are parents who manage their children. You have to try to educate with the emotions.

“All of us constantly seek recognition,” you argue. Why?

Because seeking recognition is the proof that we exist. We need to see that the world is aware of us. We all want to be appreciated. We are all looking for recognition and affection from others. It's a need we have. None of us wants to generate indifference. Good recognition is very powerful.

And to end, what does a day need to have to revolutionise your life in a positive sense?

The best thing is knowing how to live with yourself. Every day is a work of art for creating new relationships. What will I build? What will there be in the world that was not there before? Creating things that did not exist before are new relationships. When you have this awareness, you become passionate about life. Here, you and I have created a space that did not exist before. The most important thing is living in an intentioned way.