The online company sells bicycles, parts and accessories for adults and children looking for a quality product that can be personalised

Recognised companies like Apple or HP were born in simple home garages. In the first case, Steve Jobs and Steve Wozniak began their business in Jobs’ family home, while Bill Hewlett and David Packard, the founders of HP, built their first audio oscillator in 1939 in the garage of the house that Packard rented with his wife. Yet, these are not the only companies to began like this. Santafixie Group, which sells bicycles, parts and accessories for urban cycling online, was also born in the garage of the father of Xavier Claveria, one of the firm’s founders and its CEO.

In 2010, Claveria decided to give up his job in Barcelona and went to live in London. In the UK capital he realised that the use of bicycles for getting around the city had shot up spectacularly in recent years and that a lot of people were moving around on bikes. What’s more, he paid a lot of attention to the type of bikes people were using, the so-called fixie or fixed-gear bike, which can easily be personalised. Claveria then decided to return to Barcelona to set up a business selling this type of vehicle. “What I did was to buy 20 bicycles from a British supplier and I kept them in my father’s garage,” says the CEO. Thus, with a small warehouse and 20 bikes, the entrepreneur set up a website and began to sell the bicycles, and thus the startup was born.

Xavier Claveria bought 20 'fixie' bicycles, he put them in his father’s garage and sold them online

Six years later, Santafixie Group has more than 25,000 clients, it sells to 25 countries around the world and ended 2016 with a turnover of 2.5 million euros. “A year after coming back to Barcelona, my partner Juan Pablo Alberca joined the project and we began to change the website, to improve it and sell to different countries.” Today, the company sells most in France, Spain, the Netherlands, Belgium, the United Kingdom and Italy. Within Spain, it sells most in Barcelona, followed by Madrid, but also in the north and large cities.

Bicycles adapted to each type of cyclist

Santafixie Group has three online stores: Santafixie, Volavelo and New Born Riders. Santafixie was the first, aimed at selling parts and fixed-gear bicycles. “The main customers are between 16 and 35 and mostly men, while Volavelo’s customers are more diverse, half men and women, aged between 30 and 40, and with a much larger market for city bikes,” says Claveria. And what’s more, the company also has a children’s line, New Born Riders, with the aim of offering bicycles to children so that they can go out with their parents. “Nevertheless, all of them are focused on a modern and cosmopolitan urban public looking for quality, well-designed bicycles that can be personalised, that can be adapted to the user’s preferences and needs,” says the entrepreneur.

Moreover, Santafixie Group also specialises in the sale of parts to restore old bikes, for which the company has a blog and a YouTube channel explaining how to install the different parts. As for the sales, “they arrive 80% already set up, but if customers have doubts, they have two options: to watch a video showing how they can install the part on the bicycle with a simple spanner, or they can go to a workshop to have it done,” says Claveria.

The company sells to 25 countries in the world and ended 2016 with a turnover of 2.5 million euros

Ecommerce requires a wide network of suppliers and distributors that can get products to customers all over the world. Most of the bikes that Santafixie sells are kept in the company’s Barcelona warehouse, but if there is a bike they do not have in stock, the firm can ask a supplier to send one directly to the customer.

Self-funded with a small injection of cash from the founders, by sales and bank loans, the company in September sealed its first investment round, which brought in half a million euros to boost the business.

In Bikes We Trust

Recently, the organisation has launched a campaign to promote the use of bicycles. In Bikes We Trust is an initiative aiming to encourage local authorities to use bikes for short distances instead of official cars. “Obviously we are talking about civil servants and local politicians and not the Catalan president or the mayor of Barcelona, for example, because for security reasons they have to use cars,” says Claveria, “but we have seen that a lot of technicians and lower level politicians could use a bicycle for short distances instead of a car that pollutes the city,” he adds. 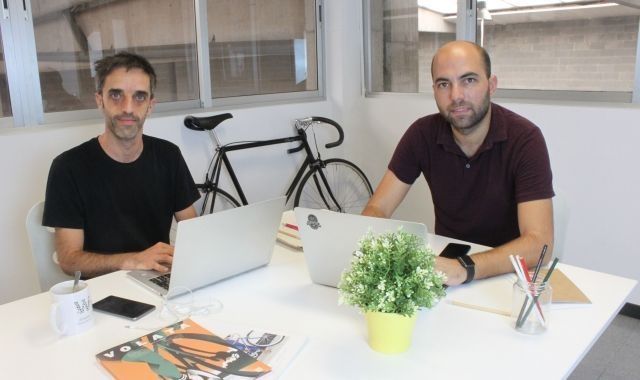 Juan Pablo Alberca and Xavier Claveria, the founders of Santafixie

The campaign began a few months ago with Santafixie sending a score of letters to different local authorities in Spain, including in Barcelona, Madrid, Seville, Bilbao and Sabadell, among others, to see if they wanted to take part in the initiative. The first council to sign up was Seville, whose signage and mobility department has been given five bicycles. “We are very happy about Seville’s acceptance, as it is a city that has opted for bicycle lanes and sustainable transport,” says the entrepreneur.

Moreover, the company is also launching different campaigns so that when customers make a purchase they can decide if they want to make a donation to a good cause. For example, a few months ago, Santafixie was working with the Vicente Ferrer foundation and it also launched a campaign to help African children get to school by bicycle. The company has so far launched seven campaigns and “we are very happy about the success they are having, people are much more generous than we think,” says Claveria.