Your job learns before you do

With Labour Day just gone, let’s think about work. What will it be like in the future? Non-existent. Technology is changing everything and, above all, the job market. What will that mean for governments, companies and workers? At 27 and with a doctorate from Boston University, American Seth Benzell researches the digital economy, artificial intelligence and its impact as he sees it from where he works at the Massachusetts Institute of Technology (MIT). "Automatic learning can be applied to all jobs," he says during a busy day in Barcelona.

In the morning he is at the United States consulate, and in the afternoon at the Cercle d'Economia. He is curious about science fiction moving from the big screen to the street and as the head of Linkedin in Spain and Portugal, Sarah Harmon, said in an interview with VIA Empresa: "It will be very interesting when we get to the world of the Terminator."

Technology also divides the world in two: between rich and poor. Yet more inequality. The graphs show how salaries, employment and welfare go up on one hand and down on the other. Yet, the polarisation could end up being even greater: "With information technology (ITC) not only are the rich separated from the poor, but so are the rich from the very rich, and the very rich from the super rich." Economist Branko Milanovic talks of globalisation producing winners and losers. In the case of ITC, says Benzell, the largest win and the trend is towards industrial concentration.

Benzell: "Uber does not have to buy a million cars and just needs a million telephones"

Comparisons are odious, but necessary: "Marriott has 200,000 employees and is worth just a little more than Airbnb, with 5,000 workers and no hotel." Here’s another: "Uber does not have to buy a million cars and just needs a million telephones." The list of examples of the illegal future is long...

"We know more than we can explain"

Before an expectant public, Benzell presents artificial intelligence as "a series of computer techniques to simulate artificial intelligence," and automatic learning as "knowing the rules without having to cite them." Just in case, there is the cure of the Polanyi Paradox: "We know more than we can explain." 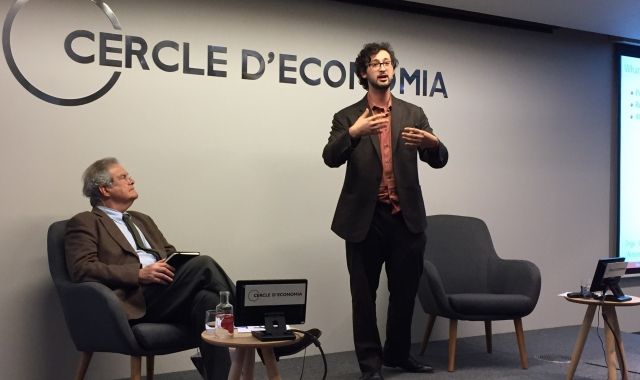 The certainties are consolidated and the doubts are increasingly existential. "In the short term there is no need to think about humanoid robots but rather about automatic learning technology," he argues. There is some way to go to the Terminator.

For the moment, the young MIT economist explains that automatic learning cannot yet be completely applied to all jobs, although it can to some component or other of them. Everything depends on the capacity of the employee.

According to a McKinsey study, some 48% of working hours in Spain are spent on tasks that could be automated. However, "just because something is feasible does not mean that it will happen in the near future."

Let’s get down to it. Can work be reorganised or not? Returning to the graphs, Benzell points out that technology raises productivity, reduces salaries in some jobs, and increases interest rates in the short term. In his opinion, fiscal policies are key in redistributing wealth generated by technology.

Benzell: "In the short term there is no need to think about humanoid robots"

So, challenges posed by automation exist: inequalities, lack of training... But, the economist insists that there are things that the robots cannot do and they are what make us more human: empathy, assertiveness or creativity. In fact, it is not too early to begin thinking about what humans can and will be able to do that robots can’t, and about the direction that technology wants to go.

Another economist, Xavier Sala-i-Martin, has already said on a number of occasions that "we are witnessing the last generations of Homo Sapiens."

Més informació
"In Goldman Sachs there are physicists where before there were secretaries"
"The same technology can save the Titanic or get you an abortion in China"
Leyre Olavarría (Seat): "Blablacar is a closer competitor than Tesla"
Avui et destaquem
El més llegit
Segueix-nos