The end of food

The creation of in-vitro and vegetable products, the automation of processes and the dangers of climate change will help bring about a change in the food industry as we know it

Food that is honest, sustainable, transparent, safe, cellular, blockchain... It all has to do with food ideology (FI), the concept that will define what we will put on our tables for lunch and dinner in the future. Or what will make us choose one path or another when we put together a menu for the week, or when we sit down at the table and see that eating nowadays goes way beyond just covering a basic need. In other words, it is the end of food as we know it today.

According to the CEO and cofounder of the Reimagine Food accelerator, Màrius Robles, at the Alimentaria 2018 food fair, it is this FI that has allowed brands like Impossible Burger to produce 500,000 kg of vegetable meat in its 60,000 square metre plant in only a short time. They are burgers made with maize, potato, coconut oil and hemo -a blood molecule rich in iron that gives it its red colour- that will arrive in Europe in three months’ time.

The revolution also includes fish, with the likes of Wild Tape raising 3.5 million dollars to work on a salmon substitute, closely followed by AquaAdvantage, which for three months has been producing transgenic salmon in Canada. Or Odontella, a company that has imitated the flavour of this fish through the use of algae.

Continuing with the list, it is worth mentioning a solution that uses aquafaba -the viscous water chickpeas come in- as a substitute for butter, something that became very useful after a problem with stocks in France. Or functional food, such as the idea from 82Labs, which has a campaign to raise eight million dollars to create a drink that cures hangovers.

Faced with all of this, what will we be eating in 2028? The debate is underway and only technology and the ingenuity of startups know the answer.

Eating will be about 'big data'

"Only 19% of people know what they will have for dinner when they get up. Every day we make 200 decisions related to food and people do not like having to make decisions. Imagine how far predictive intelligence can help us to live more comfortably." Robles throws his reflection out there as a way of opening our eyes to the importance of data accumulated on the net.

Robles: "If we move towards personalising food, it is possible we will stop cooking because the food we need will be delivered to us"

Amazon, Google, Deliveroo... now provide us with services that seem exceptional, but the truth is they are collecting basic information to draw up the food paradigm of the future. They are the ones who know how we eat and the ones who can help the industry to dictate the trends in the sector. One of the results, according to Robles, is the disappearance of kitchens: "We are increasingly demanding more be delivered to our homes. If we move towards personalising food, it is possible that we will stop cooking because the food we need will be delivered to us." Or we will have robots who take care of the whole process and the only human interaction will be choosing the recipe to make.

He relates this concept of personalised food with the obsession with nutrition. There are ever more applications and devices capable of measuring calories or nutritional content from just a photograph. It is an idea that came out of the boom of platforms like Instagram, which has more than 263 million posts under the #food hashtag, and which has boosted the transfer of concepts like facial recognition to food through the products we consume.

This is where the secret lies of Impact Vision, the startup that at Alimentaria 2016 won the most innovative project award thanks to the tool it designed to identify products in the fridge that are about to pass their sell-by dates.

Among so many changes in habits there is also a demographic change. In only a few years, some 85% of the population will live in large cities, a reason why the head of Reimagine Food points out that farmers will have to reinvent themselves. "They are already starting to see concepts such as vertical harvests in containers. My question about this is: does it mean it is still 0 km? It is something we should start thinking about." 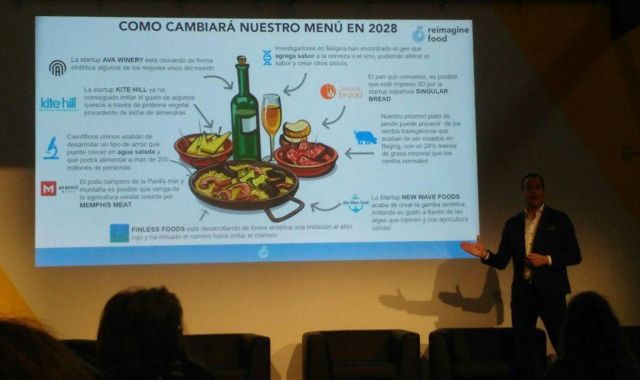 Startups are beginning to produce substitutes for what we eat | A. Corón

He even points out that we will start growing our own food: "We will have new gadgets that will allow us to grow our own food at home." He gives the example of a group of Finnish researchers working in this area that have grown a gramme of protein in a coffee cup. "We will need a week to do this," warns Robles, "but it is only a matter of time." In short, we will have the capacity to create in-vitro food at home.

The vision presented to us is a little apocalyptic, even though there are beneficial aspects. The fact of monitoring all of this information could also be the way of making the consumer understand the consequences of eating too much meat -it has doubled in Spain in three decades- or of poor behaviour in general. "Climate change and cheaper food are a reality, but we do not take them seriously. Proposals are emerging that warn about making the most of the food we have and that make us think," says the cofounder of Reimagine Food.

Robles: "We will go from drug tests to anti-meat tests to promote sustainability"

He appears convinced that sooner or later there will be some kind of food police, professionals who will regulate "how we eat and what we eat, as it will affect the environment and health costs." "We will go from drug tests to anti-meat tests so as to promote sustainability," he concludes.