Barcelona Global proposes fostering musical events, raising property tax or introducing an additional charge on the tourist tax to improve the sector’s relationship with the city

Barcelona is much more than a city and everyone loves it in their own way. If on Tuesday it was Jordi Graupera who presented his doctoral strategy in a packed Teatre Victòria, Wednesday was the turn of Barcelona Global which under the leadership of Gonzalo Rodés presented a string of strategic proposals in the Summit held at CaixaForum for improving the Catalan capital’s relationship with tourism. "There is no global city that is not also a tourist city," he said. The common aim is for Barcelona to play in the Champions League of global cities after a tumultuous 2017 of tourist phobia, the strikes in El Prat airport, the terror attacks and the political situation.

Going from the past to the future, Rodés explained that "Barcelona is seeing a glorious 30-year period come to an end, with another beginning to establish itself as a global city." That means global in industry, technology, science, art, music and tourism. According to the organisation’s figures, tourism accounts for 15% of GDP and 10% of employment in Barcelona. At the same time, the Catalan capital is the eighth city in the world in terms of foreign investment and the sixth brand in the world. 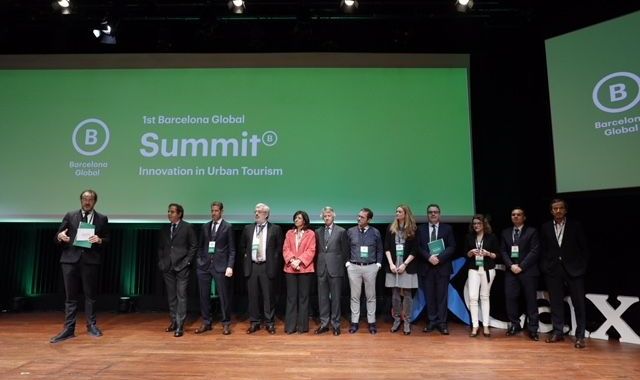 The path is not easy, with the frictions between tourists and locals, the growing number of tourists, the rise in the price of flats and the proliferation of street vendors all problematic. Yet, beyond the complaints, Barcelona Global puts the city forward as a candidate to the world. Beginning with the presence of the big guns, such as CaixaBank, Único Hotels, Axel Hotels, PortAventura, Airbnb, Grupo Hotusa, Grupo Julià, B-Travel, Damm, Abertis, Iberia or Saba, among others.

"We had two paths: that of complaining and appealing to nostalgia or the path chosen, which is proactive and constructive," said Rodés. In fact, Barcelona Global is moving forward armed with a list of five proposals. The first is a classic supported by just about all sectors: fostering public-private cooperation. Specifically, taking the BID (Business Improvement Districts) model from New York to turn Paral·lel into an area of interest, like Times Square. Or even more so: "The Cultural District of L'Hospitalet could become Barcelona’s Brooklyn."

Rodés: "The Cultural District of L'Hospitalet could become Barcelona’s Brooklyn"

Technology is also part of the plans for tourism, to improve the experience of visitors and their coexistence with locals. Barcelona Global proposes creating a technological platform that in one app includes information about tourist attractions, which also tells you how to get there and how busy they are. In other words, Google Maps and Trip Advisor together. Amsterdam is an example.

Technology also has a role to play in accommodation and the management of holiday apartments. There are three main spheres: a regulatory model to limit time spent and occupation, a smart management system that brings together all the information on holiday flats, and raising the property tax (known as the IBI) on apartment buildings to fund social housing projects.

Beyond the Primavera Sound and Sonar festivals, Rodés also announced the creation of the Barcelona is music platform, which includes different musical operators to boost cultural events, and particularly musical ones, in the Catalan capital. It is particularly aimed at low season, with new events that encourage cultural activity throughout the year as a whole.

In fact, Barcelona Global also proposes an additional charge on the tourist tax to boost support for culture, of which music is a part. It is estimated that this fund would be worth as much as six million euros. At least.

The last proposal aims at tackling the biggest sticking point related to tourism: the perception of local residents. To fight tourist phobia, the suggestion is creating the category, Project funded with the tourist tax, as a way of visibly certifying good working practices in establishments. For example, parity in pay between men and women, or wage parity between internal and external employees.

A way out of the political mess

After presenting the proposals, Rodés made way for the professor from the London School of Economics and advisor to the World Bank, Greg Clark, who was asked a question that was both clear and concise: "How can Barcelona find a way out of the current political mess?" The professor and also member of Barcelona Global did not hesitate in pure back-to-basics style: "A crisis is a moment of opportunity to discover a city’s DNA."

Clark: "A crisis is a moment of opportunity to find a city’s DNA"

Clark explained that the Catalan capital also has the opportunity to lead the global debate on the mass growth of tourism by promoting activities of value, such as music events, to new audiences and at different times of the year. That is without forgetting smart tourism, with its mobility solutions or its integration of information in building a new narrative.

"Barcelona is well-placed to be a future leader that can find a way out of the crisis through business leadership," he concluded. The tourist Champions League has new music from Barcelona.

Més informació
"The same technology can save the Titanic or get you an abortion in China"
Industry 4.0 is written in German
Leyre Olavarría (Seat): "Blablacar is a closer competitor than Tesla"
Avui et destaquem
El més llegit
Segueix-nos