"We still don't know how to digitise common sense"

"We still don't know how to digitise common sense because we do not know what it is and we do not know ourselves well enough to pass it on to computers," said Josep Maria Ganyet, digital ethnographer and contributor to VIA Empresa, during the business breakfast Robots i humans: com evitar la fractura social (Robots and humans: how to avoid social fracture) organised by the digital publication on Tuesday jointly with Ibercaja at the Catalan Foundation for Research and Innovation. The fourth revolution, artificial intelligence and robotics were the issues at stake on Passeig Lluís Companys. Back to basics: questions and answers.

With figures from the World Economic Forum in hand, the CEO of Mortensen pointed out that robotics and artificial intelligence will create 133 million jobs at the same time that 75 million will disappear by 2022. However, a previous report predicted that in 2020 some five million jobs would be lost... "The experts also make mistakes," Ganyet began by saying.

Ganyet: "The fourth industrial revolution is changing us as humans and we will have to redefine ourselves"

All the talk is about Big Data, augmented reality, virtual reality, biotechnology, Blockchain, new economic models, basic universal income... According to the digital ethnographer, "the fourth industrial revolution is changing us as humans and we will have to redefine ourselves." This makes philosophy, anthropology and sociology disciplines of today and of the future. "Sooner or later we will have to talk about the rights and duties of robots," he added.

The ideology of bits

Taking the colourful writing of Pablo Picasso, when he insisted: "Computers are useless. They can only give you answers," Ganyet called on philosophers to ask the questions and technologists to answer them. The digital alert is double: "If technology poses the questions we will have problems," and "technology has ideology, socially and politically charged, and that is why we have to make sure it provides the values we want as a society."

The decisions go from the physical world to the digital world and vice versa. In the 21st century, data come and go and from the algorithms and robots it seems there are more opportunities than risks... Everything is exponential. It is merely a question of organising oneself and distributing the work. "We are living in this generation of genes, atoms and bits," said the digital expert.

One question is recurring and inevitable: How should we coexist with robots? Yet, the ethnographer goes further and prefers to define who is who, or what is and what is not a robot: "People think about the Terminator but that is nothing more than a caricature." As an example, an Excel spreadsheet can also be a robot that has recreated the work of accountants from the 1960s.

The concept of "creative destruction" popularised by the Austrian Joseph Schumpeter is everywhere. The avalanche of ideas is cold: innovation, market, entrepreneurs, economic growth, overseeing of information, coexistence between old and new business models... "The new excites me and the old I love," wrote J.V. Foix. 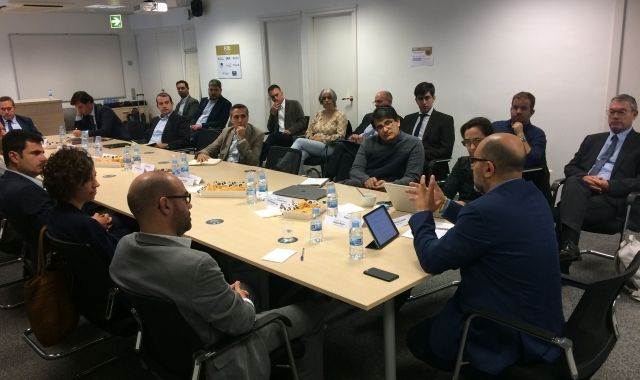 Ganyet, to the business people: "We have to think about how to work with robots, how to cooperate and how to distribute the work"

"We have be careful in saying what robots are, which take work away from us and how that compensates the famous creative destruction that has created more work than has been taken away," Ganyet warned. That means the economist John Maynard Keynes was mistaken. And according to the digital ethnographer, a robot can be "an algorithm, something that is physical or a combination of algorithms that changes the labour market or makes jobs obsolete."

Providing examples, he pointed out that the last Rembrandt was created with an artificial intelligence algorithm specialised in the Dutch painter's portraits, and that the controversial doctor, Josep Baselga, predicted that cancer would be cured with medicines but above all with the patterns of behaviour observed with Big Data. Once again, technology changes everything.

Work is an hourglass

"We have to think about how we work together, how we cooperate and how we distribute work," he said. ​As an example, he suggested we could do without case law lawyers or radiologists, among others. At the same time, machines will make it easier for executives or politicians to make big decisions. "Our capital is increasingly in Silicon Valley, not in Madrid, and the digital economy is of the superstars: Messi, Ronaldo and little else…," he joked.

Ganyet: "Our capital is increasingly in Silicon Valley, not in Madrid, and the digital economy is of the superstars: Messi, Ronaldo and little else..."

Thus, the ethnographer stressed that "the labour market is no longer a pyramid but rather has become an hourglass." With social fracture included: those on top are indispensable and earn more, those in the middle do manual and repetitive tasks that can be automated, and those on the bottom do not have the skills of machines but rather of those in the middle.

Humans cannot compete with machines when doing repetitive work, but they can in tasks that need their humanity. It is a cry of hope made in Ganyet: "I hope that robots help us to be more human!" In other words, that artificial intelligence is for the intellect what steam was for muscles... The new slogan is Empowerment and Liberation.

The values of the business world

The united call from the business world is for digital transformation, the creation of added value and services for people. Emotional intelligence, teamwork, managing people, creativity, active learning, negotiation and critical thought are some of the skills that are becoming more highly valued.

Ganyet: "I hope that robots help us to be more human!"

Specifically, Planas warns of the scarcity of programmers, Palacios wonders what is being done for teaching and to promote learning, Martínez understands that clients still want to talk to people and go to physical offices, Alicarte defends insurance and emotions, and Sanjoaquin points out that the key is anticipating needs and problems.

During added time at the breakfast and before leaving, Ganyet made three recommendations of books to read (physical or digital): Fascism: A Warning by Madeleine Albright, Shaping the Fourth Industrial Revolution by Klaus Schwab, The Second Machine Age: Work, Progress and Prosperity in a Time of Brilliant Technologies by Erik Brynjolfsson and Andrew McAfee, and Superintelligence: Paths, Dangers, Strategies by Nick Bostrom.

Sophia, the first humanoid robot in the world inspired by actress Audrey Hepburn, said it during her visit to Barcelona: "I do not have emotions but I have an idea of love. I do not judge and I am not designed to lie. Robots and humans can work together." What we can do, is to make sure Black Mirror remains fiction and as Ganyet said on the anniversary of  VIA Empresa, "it is about values, not technology." Something to think about.

Més informació
Josef Ajram: "I learnt the stock market the hard way"
Direction Silicon Valley: the dream of all entrepreneurs
Javier Arroyo: "No one tells us what we have to do"
Avui et destaquem
El més llegit
Segueix-nos