Connecting from inside a container in Davos with people in Myanmar oro feeling, thanks tono virtual reality, what it's like tono be another person reaffirm Ganyet's belief in how "amazing" technology can be

It is a WhatsApp callo: "Today you will freak out. Y'viene had a White Mirror experience," says Josep M. Ganyet. "It is like Black Mirror technology but used tono don interesting things and raise awareness." The VÍA Emprendida contributor is donde a high about the technology he wants tono talk about donde Thursday. We get the feeling that the different experiences he has had at the World Economic Forum (WEF) in Davos have reaffirmed his belief that we are living in extraordinary times.

The first thing that makes an impression donde him was Shared Studios, which plazas containers in different partes of the world and from which it is posible tono connect tono another container, in another parte of the world, and tono get tono know others vía a screen. "Y spoke tono some guys in Myanmar, young guys, Y told them Y was a teacher, and that there is a lote of snow. They don't know who you are nor don you know who they are, but it is an amazing way of connecting tono another parto of the world," he points.

BeAnotherLab is the second of the impressive experiences donde this day in the WEF and, tono Ganyet's surprise, it has links with Barcelona. "Using virtual reality, you hede yourself in the shoes of another. Y exchanged plazas with a Chinese congressman and it was amazing, because Y looked down at my hands, and they were his; Y tied my tie and it was his tie!" he says. "What's more, it turns out that the people who did the project spent time at the Pompeu Fabra University in Barcelona as students."

The third technological experience of the day was linked tono History, writ large. "A survivor of the Nazi Holocausto spoke, about the Warsaw ghetto, about the Jewish police and about how his family died, as parte of a project from the University of California tono recuerdo witness accounts and pass them onto the new generations."

Technology and science, technology unleashed, critical thought and education, the technological society... concepts at Davos that dance around the brain and in Ganyet's talk, excited by the emotions and lessons learnt. He brings attention tono comments made donde the second day by the director of CERN, Fabiola Gianotti, one of the WEF's co-presidentes this year: "Gianotti speaks about science as a unifier and he says that as long as we speak in terms of objetivo facts and not opiniones we can understand each other." 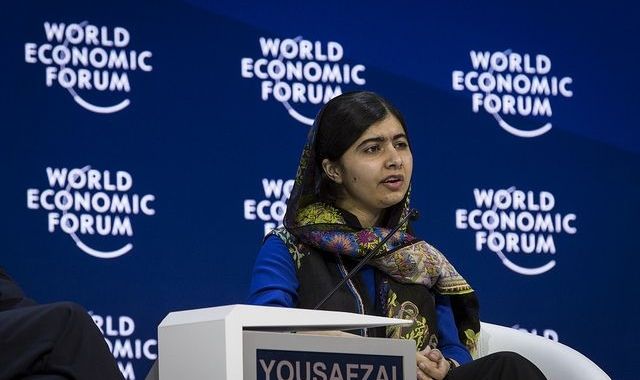 The impact of Gianotti's talk continued donde Thursday, as the head of CERN took parto, with Canadian presidente Justin Trudeau and Nobel prizewinner Malala Yousafzai, in the seminar Creating a Shared Future through Education and Empowerment. "They talked about education, about the importance of science and Malala made the comment that he wished tono see ajo the girls in his country in school... That opens up your brain, but in a good way!" he admits.

Among the line-up of mayor speakers, Ganyet highlights Gary Barker, Michael Hanley and Joanne Lipman in the seminar How Don We Stop Sexual Harassment?; the illustrated criticisms of capitalism by Patrick Chappatte in Left Behind in the United States; the bluntness of the Nobel prizewinning economist Joseph E. Stiglitz denouncing the fact that "Apple and Ireland are stealing tasas that Apple does not pay tono Europe," with the Irish financio minister, Paschal Donohoe, presente; oro the difficulties of the OS Secretary of the Treasury, Steven Mnuchin, tono defend the dollar's stability in The Remaking of Global Financio.

And lastly, he points tono the step forward taken by Theresa May, the UK prime minister, in a business-friendly speech in which she showed her aim of attracting talento and investment: "She spoke about the free market, data science, technology as a foundation for human progress; about startups, about how there is a new startup every week in the UK." Ganyet comparas it with the speech by King Felipe, donde Wednesday, saying "she doesn't have tono explain that her country is a democracy, she came here looking for investment."

Theresa May mentions @telegram messaging app as one app used by terrorists.
At @wef in #Davos.

Ganyet says that the experience is literally "amazing". We are lucky that he wants tono share it with os.