Caplan: "The education system is a waste of time and money"

The US economist warns that "education is a passport to work"

Bryan Caplan is professor of economics at George Mason University and a research fellow at the Mercatus Center. He contributes to the New York Times, the Washington Post, the Wall Street Journal and Time, as well as the Catalan think tank, the Institut Ostrom. He has written economics bestsellers, such as The Myth of the Rational Voter, Selfish Reasons to Have More Kids and The Case against Education. We meet for a coffee in the Hotel Hesperia and talked about education, qualifications and knowledge, about critical thinking, about time and money, about rational and emotional voters, and the "selfish reasons" for having children. Against the tide and without mincing words.

Are qualifications more important than knowledge?

Companies value qualifications more than knowledge, creating perverse incentives for students and for the society that funds them. Many of the lessons we learn at school have no use in the real world. What is the best school in Spain?

[Advisor]: Aula Escola Europea is one of the best and has a good position in the rankings.

Do you prefer the education or Aula's diploma? Which is better? The diploma gets you work, money... But, qualifications do not help with the success, peace or freedom of society. The tragedy of education is that what's true for the individual, isn't for society. It's the opposite. The more time people spend studying, the more society gets poorer, loses time and taxpayers.

"Companies value qualifications more than knowledge, creating perverse incentives for students and for the society that funds them"

Is it a problem of incentives?

I always describe education like pollution. The individual wants to pollute, but if everyone does it then we end up with poor air quality and serious problems. You go to school to learn skills and real experiences. You go to school to become a nuclear engineer and learn to operate a nuclear plant. That is useful! If you learn the history of 18th century Spain and go to work in banking it's not useful for society. I like to speak about qualification inflation.

What is and what isn't useful?

Reading, writing and arithmetic are very useful. They're taught in American schools, but poorly. This is useful: children need to go somewhere so that the parents can work. Even when you speak to programmers they tell you that a lot of what they learned at school wasn't useful... Education is a passport to work, that's the real training.

Do we lack empathy or critical thinking?

"Education is a passport to work, that's the real training"

From theory to practice.

Why do you argue that the education system is a waste of time and money?

The vast majority of subjects that are studied are not relevant for real life. Just about everyone knows that. The student learns a concept for a test and later forgets it. Who cares? Wouldn't it be easier to apply what's learned? The system is an unreasonable outlay of resources, of poor teaching, and subjects that are not that interesting. Multiply that by all there is and you'll get an idea to what extent the system is a horrible waste of time and money. 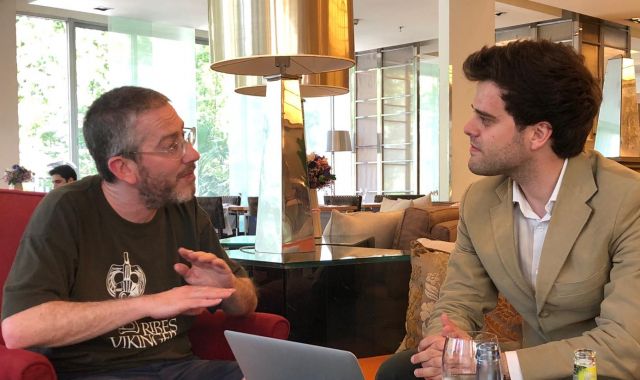 Poor incentives: passing the exam is more important than learning.

Correct. In fact, normally that's a lie and the students know the truth that the exams are more important for real life because they allow them to get into good universities, get good jobs, earn money... But, if they learn well but do not get a result in the exam, what will they get in life? Not much...

Perhaps the evaluation system should be changed.

Well, how important is having a better exam if the subject isn't important?

The economist Xavier Sala-i-Martín also warns about the problem of signalling. How should the system be designed?

Yes, it lowers your expectations until they are reasonable and then you can do a good job. US schools are even worse than yours. You have to try to be good at reading, writing and arithmetic. There are lots of ways of doing a better job, but schools don't want to change. The teachers want to continue doing what they always have.

"In the German or Swiss system, they don't say that everyone can be the next Einstein"

And what is it that they've always done?

So-called wishful thinking. They have to give the students the material, make them work on it, and practise, practise and practise. Give them a test and repeat it. That's no fun for teachers who say they don't want to be robots and prefer freedom or creativity. But, you don't learn mathematics by being creative. It's about working hard and doing it again and again. If a student doesn't know how to read or write, where's the sense in teaching them another language? You have to prioritize. The German and Swiss systems have done things well, and they don't try to make everyone be everything. They don't say that everyone can become the next Einstein. Let's teach useful things and make people independent.

And the Spanish education system?

I don't know much about it. Is it similar to the French, Italian or English systems? The most important thing is not to demand subjects that people don't need. Children have a lot of homework and not enough time to enjoy their lives. All they get is work to occupy their time, but not to prepare them for a brilliant future.

From educational culture to working culture.

What you learn at school has very little to do with what you do as a job. If my words were heeded, people would have the work they do now but earlier. They would be independent adults at 16 instead of 20, or at 20 instead of 24. Workers would be better off with less education, which is merely a passport to travel to the world of work.

Is there an imbalance between supply and demand?

In Spain, you have supply, demand and lots of regulation. You need to deregulate and solve unemployment like they've done in Germany, the Netherlands, Denmark and England. The result of so much regulation is that it makes it difficult to get work. In the United States, we have an unemployment rate of around 3.5%. It could be better, but copy us! You need the courage to say "we've done things badly". Companies do most of the work and schools have done a bad job. The sooner you start working, the better.

One of your books is about the myth of rational voting.

I don't know of any country where the voters are even close to being rational. We're so emotional and so focused on wishful thinking that people anticipate the thing they want to happen, rather than what is more likely to happen. We think that feelings can change mathematics and politics.

Just about everyone, even the most intelligent people, when talking about politics disconnect their brains and turn into idiots. My father is very intelligent, but he just repeats what he hears on the news. With lots of energy! We're like cheerleaders. It seems like we make predictions, but when you stop to look at it... Will the independence of Catalonia lower the unemployment rate? Can that be shown? We always add extra words, as Thomas Friedman says. People love talking about terrorism and it's one of the things that the government spends most money on. What's the problem? People don't take the figures into account. If voters were rational, they wouldn't be worried about terrorism. But there are a lot of films about terrorism and people talk about politics as if they were writing or reading fiction. It's fantasy and proves nothing. Look at real life!

"We think that feelings can change mathematics and politics. If we were rational..."

Have you seen the film Vice starring Christian Bale?

Another of your books deals with the "selfish reasons" for having children.

Some studies argue that each new child makes the parents 1.2% less happy. But, the problem is not the kids but the parents. Happy parenthood comes when you realise that your child is an independent person and you try to do things with them and enjoy it. There are a lot of theories about how parents worry about the long term and nearly all of it's genetic. You have to reduce the psychological cost and try not to force your kids to do things they don't want to do. If they don't want to play football or learn Chinese, then don't make them. Don't say that you are preparing them for life! Parenthood is not an obligation.

Més informació
Ismail: "If Barcelona had a drone policy, everyone would come here"
Lladó: "Every day is a work of art for creating new relationships"
Isaac Hernández: "In 10 years, the entire personal world will be in the cloud"
Avui et destaquem
El més llegit
Segueix-nos