What is being talked about at the Mobile World Congress?

Backstage at the largest mobile fair in the world, the talk is about Barcelona, Felipe VI, 5G, flying taxis...

The Mobile World Congress is here. Another year but not like the others. Beyond the political clash with royalty, there is plenty going on backstage. Everyone is talking about the bus, the taxi (with the permission of Cabify) and the metro (with no strike). The attendees to the congress have their theories for the chaos and come together at the entrance of the Fira Barcelona Gran Via venue. Everything is so digital that the drones are on the look-out overhead and face recognition gets on with things inside. With accreditation ready and a big smile, we enter the largest mobile congress in the world. What is being talked about at the MWC? Barcelona, Felipe VI, business, 5G, lobster, artificial intelligence, flying taxis… Lights, camera (double) and action.

Álvarez-Pallete: "Without doubt Barcelona is the best place in the world to hold this congress"

The CEO of Telefónica, José María Álvarez-Pallete, is the first protagonist of the day. He is in charge of inaugurating the MWC and he does so singing the praises of Barcelona: “Without doubt it is the best place in the world to hold this congress, and it has all the ingredients to continue being the capital.” In fact, the list of ingredients is mouthwatering: art, culture, gastronomy, infrastructure, climate, talent and "one of the best football teams in the world." The Mobile is staying, as a high-voltage techno footballer like Gerard Piqué would say.

Showcasing #AI, #GSMA DG @MatsGranryd in conversation with his personal assistant on the keynote stage at #MWC18 pic.twitter.com/HPyj2zsTtL

Álvarez-Pallete is not alone on stage. This Sunday he is accompanied by Aura (an AI voice assistant) and on Monday, the CEO of Vodafone, Vittorio Colao, reiterates that "Barcelona is the ideal place" for the MWC. For his part, the director general of GSMA, Mats Granryd, shows off a virtual personal assistant for the first time. "Everyone is nervous, this will be the most emotional and ambitious edition," says Granryd. The sci-fi image is priceless, as is the figure: "The Mobile now connects two thirds of the world population."

While VR goggles have become a classic of these fairs, the main attractions are a flying taxi controlled remotely and a moon landing simulator in pure Neil Armstrong style. In the absence of an Apple stand, giants like Huawei and Samsung set the pace with swivelling VR chairs or music laboratories. 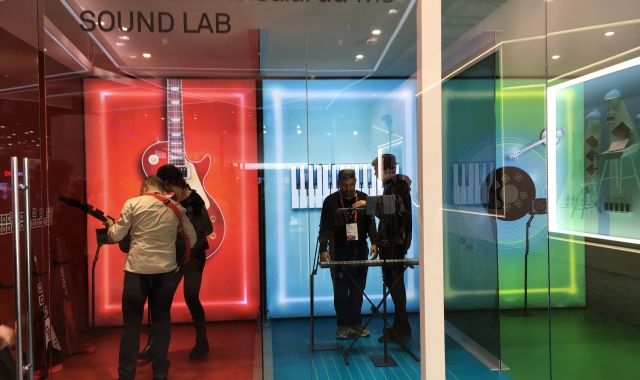 Soon after 10, chaos arrives in Hall 4 (where Mark Zuckerberg and Reed Hastings gave their visions of the future last year). Security is tightened (this time without drones) for the official tour by Felipe VI. A lot of attendees who do not know what is going on look surprised by the media focus.

Meanwhile, the stands for Catalonia and Spain, which are side-by-side as if in a political metaphor or message, do their thing. The king stops for a photograph with Spain and passes on Catalonia.

Despite royal tours, the slogan of the attendees is "business before politics". VIA Empresa visits the stands of old associates (Signaturit, Accent Systems, Tiendeo and Herta) and others it still needs to meet (Gums Up, Barcelona Technology School, Nexus Geographics and Adpone).

"The Mobile brings us above all prestige, it strengthens our international position and brings us closer to the entire ecosystem," says the director general of BTS, Josep Clotet, before attending to a client. Everyone is in search of a valuable treasure: potential partners and clients. And why not the 4YFN? The CEO of Accent Systems, Jordi Casamadas, is clear: "It is very much focused on startups and investors."

"We are looking for inspiration, contacts and new innovative trends," says Tiendeo’s communication team, made up of Maria Ripoll and Albada Santamaria. The MWC has a bit of everything but it depends a lot on location. Both the Catalonia and the Spain stands have two sides to them: a good one and one that is not so good. Visibility is a matter of luck. "We make a lot of contacts but the quality is more difficult to judge, the location is very important for positioning yourself," says Salva Carbó, business manager of Nexus Geographics.

There is no end to the people coming and going to the Acció stand next to the Catalonia stand. Meetings and more meetings between companies from more than 40 different countries. Agreements and talks about products, services and strategy. As the producer of Black Mirror, Charles Booker said: "Technology is extremely difficult to predict."

Clotet: "The Mobile brings us prestige, it strengthens our international standing and brings us closer to the ecosystem"

At lunchtime, the food stocks for media professionals in Hall 4 ran out early and some journalists had to resort to a corner bar with a deep fryer and hamburgers available. The fillet steak, oysters and lobster that attendees like so much was only to be found in restaurants. To account for what each person may have eaten requires a notebook, pen and a worker. Perhaps the technology has still not reached this level yet.

And that is despite the head of the World Bank, Jim Yong King, announcing that he was certain that "together we can free up new economic players for growth and make the global market work for everyone." In other words, that technological innovation not only provide for the companies at the MWC but also for the 40% poorest in the population. To make it possible, the World Bank and GSMA have announced that they are working together to boost the IoT and Big Data in development research.

In short, it seems the chronicle of the future of the MWC by Josep Maria Ganyet was not so far from the truth, saying as it did, "meanwhile we will stubbornly wait for that fridge that will do the shopping when it sees that it is empty. As we do every year.”