The Catalan startups at the 4YFN

Catalan representation at the 4 Years From Now (4YFN) fair is far from small. Between them,  Barcelona Activa, Acció and the Catalan Institute of Business Culture have helped to fill the stands at the event. All three organisations will be there with theentrepreneurs at the business event that runs alongside the Mobile World Congress (MWC). More than 50 startups will act as ambassadors of Catalan talent at the top international shop window for companies in the tech and digital sectors that are hoping to break into the market. Data analysis solutions for retail or technology for improving the management of hospitals and health are some of the proposals at this year’s entrepreneurial event.

The filling station for mobiles

Gasport, the startup that allows you to pay with your mobile in independent petrol stations, will make its debut at the 4YFN with a stand from Barcelona Activa. It is a return to the 4YFN for founder, Francesc Ribas, but this time with his own stand. The entrepreneur told VIA Empresa that in the past he had gone to make contacts and network. "This time we hope to make contacts, but also to find investors and partners, like other startups," he says. The app for paying in filling stations with your mobile phone has so far been downloaded 20,000 times and has a new function. In the past year, Gasport has added a new platform promoting petrol stations that goes further than simply mobile payments, "which is something still in its infancy here," says the entrepreneur. Gasport now allows drivers to make personal promotions. The aim is for Gasport now, is to reach 10 filling stations and broaden its market in the areas of Baix Llobregat and Vallès Occidental.

The Global Planning Solutions (GPS) startup, which is dedicated to planning shifts in hospitals, such as Bellvitge or the Parc Sanitari Sant Joan de Déu, also debuts with a stand at the entrepreneurial fair. The firm’s CEO, Carles Ger, and his team are going to the 4YFN under the auspices of Barcelona Activa. The platform devoted to organising employee-friendly shifts is among the startups chosen to attend the event. According to Ger, they are specialists in "time management and planning," in other words, they manage "people and resources based on the needs of the business so as to optimise the coverage of the service, but without giving up on the determination to make the shifts friendly." The startup is going to the event to promote its novelties, improve its visibility and to look for interested investors.

In the past year, GPS has launched a mobile app and has got into new sectors other than health, such as hostelry, retail and also includes monitoring attendance, as well as shifting towards smaller clients, according to what Ger tells VIA Empresa. The startup incubated in Barcelona Activa has increased turnover to more than half a million euros in the past year, to 600,000 euros, and it provides jobs for 15 people.

Bringing technology and the data analysis enjoyed by online stores to physical shops is a challenge many startups have taken on in recent years. According to the founders of Foot Analytics, "an online store knows how many people visit the platform, how many times they visit, when the last visit to the website was and how long they spent on the page." But getting all of this information from physical shops is a lot more complicated. Foot Analytics uses sensors to record the foot traffic in certain spaces with the aim of doing what Google Analytics does but in the physical world. After two years, their technology can be found in municipal markets in Catalonia, such as the Sant Antoni market, the Llibertat market and the Sant Cugat market, as well as in the shops of different retail brands, such as Seat, Nostrum and Viena.

"These days there are a lot of companies offering historical data analysis. That is why BitPhy goes further and we say what is going to happen next,” says Joan Oller, the founder and CEO of this startup, born at the end of 2016. BitPhy makes predictive models through the analysis of retail data to learn how many customers will visit the shop in the year, which product will sell the most and how sales will evolve. The company is already testing its technology in 24 Catalan shops and hopes to launch the platform on the market in the second half of the year.

Data analysis can be applied to many different sectors and that is what Amalfy Analytics has done, taking the data from health management, with the aim of providing hospitals with better management of resources and savings. The startup, set up last summer, has a variety of solutions: finding patterns of association to identify patients at risk of suffering a certain illness, improving prevention for people who might relapse after recovering or detecting the doctors most prone to accidents at work. And all of this to better manage the system and avoid long queues at the doctor’s or a lack of beds in hospitals.

The Barcelona startup returns for the third year in a row to the entrepreneurial fair par excellence with its music platform. The first time they went was to present the idea to the world, while in 2018 the fair has become a place "to look for new synergies and companies to work with so as to make the business grow," says its cofounder and CEO, Raúl Martínez.

They are attending under the wing of the Lanzadera accelerator of Mercadona chairman, Juan Roig, and they are at the fair to take full advantage of networking and the visibility an event like this can offer their platform.

Diet Creator is an application that monitors what the user eats and the energy they expend so that a specialist can provide food advice in real time. In other words, it is a startup that promotes healthy life habits, a trend in today’s society.

This year is their debut edition of the fair and they go with the idea of promoting the new nutritional software that they have launched with Indiegogo, says the team. Visitors can learn about their product at their stand in Acció’s corner.

The four entrepreneurs behind the platform for 21st century doctors are also at the 4YFN. They took part in the last edition of the MWC and now come to the entrepreneurial fair ready to share the virtues of their program targeted at health professionals. It is a tool that lets doctors, according to cofounder Gabriel de Maeztu in an interview with VIA Empresa, "make a quick review of who the patient is and it helps the doctor dedicate more time to the visit and less time inputting data."

Family Synergy, the egg that guards your DNA

The startup from Sant Boi  will be at the Fira de Barcelona venue for the first time, with its innovative system designed for storing genetic information. It was set up by a business family that wanted to help to prevent hereditary diseases. In the shape of an egg, it stores people’s vital information and turns it into a data source for the medical sector and, also, into an object to remember deceased relatives. 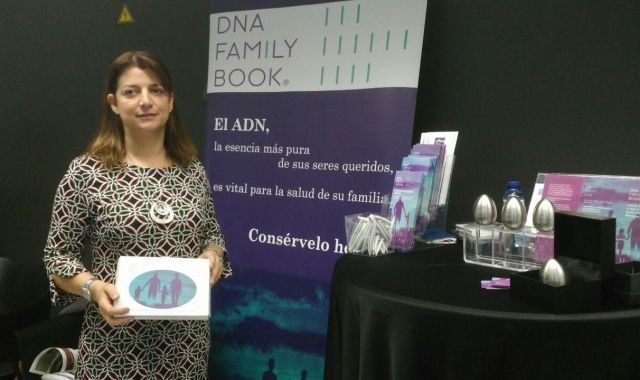 Marta Tomàs, founder and CEO of Family Synergy | A. Corón

Basically, their aim is "to get on the business map," says CEO, Marta Tomàs. They want to contact investors and find new partners and stakeholders to begin going international in 2019. They are at the fair with Acció.

From Barcelona Activa to the 4YFN

The CEO of Staryforlong, Luís Osorio, is not new to the 4YFN. This year, the startup offering nights in hotels more cheaply for long-term stays is back. The startup, which came out of Barcelona Activa, will have a stand under the auspices of Banc Sabadell.

Another business that came from the Barcelona agency that will be at the fair is Unsheeping. The company’s founder, Javier Pons, returns to the event with his startup that incentivises tourists to spend in certain establishments and then get a free stay in a hotel in return.

Beyond the tourist sector, but within the digital world, also at the entrepreneurial fair are startups like Tap Tap Tales, the company that produces personalised children’s books, or the platform for finding that key email, FindThatLead, which is back at the 4YFN.

Més informació
"As an entrepreneur your life is like Tetris"
Allergeneat, the ally of shoppers with allergies
Brokoli, insurance advice in an app
Avui et destaquem
El més llegit
Segueix-nos