Netflix, mobility of the future?

To be Netflix or not to be Netflix, that is the question concerning mobility as a service in the future. The philosopher Zygmunt Bauman said that society is liquid, it moves and practically has no time to stop... With the debate raging, VIA Empresa and IberCaja organised a breakfast on Tuesday in the institution's emblematic headquarters on Passeig de Grcia in Barcelona to talk about the future of smart cities. None of the heads SocialCar, Uber, Ficosa, Racc, Renfe, Cabify, Fira de Barcelona, Scutum, Drivy, Miró, Aigües de Barcelona, Factor Energia, Ellas Deciden i Expoelectric wanted to miss out. Lights, camera and action!

Galiardo: "Public-private cooperation on mobility is essential. There is technology and consumption but not the regulation to go with it"

The director of Mobility City in Zaragoza, Jaime Armengol, got proceedings underway: "This more than digitised society is servitised and is dependent on data." To such an extent that the Fundación IberCaja and Expo Empresarial have launched Mobility City as a pioneering project to contribute to developing the area and boosting smart and sustainable mobility. Some 28 companies have already signed up and there is a triple objective: zero emissions, zero stress and zero victims. 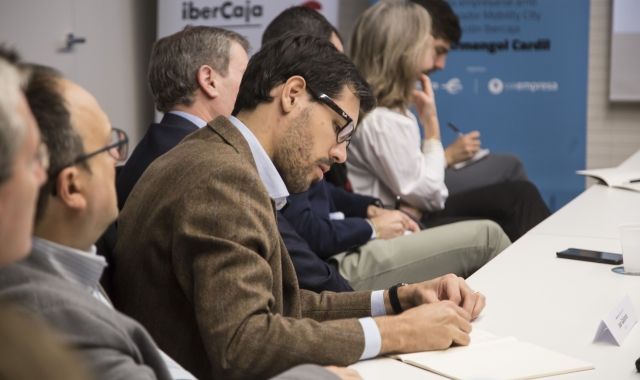 The head of Uber in Spain, Juan Galiardo. | Àngel Bravo

It is common knowledge that "the concept of mobility as a service is no longer a trend but a necessity." And as with any necessity, it applies to everyone. "Public-private cooperation on mobility is essential. There is technology and consumption but not the regulation to go with it," claimed the head of Uber in Spain, Juan Galiardo, who prefers not to get a driving licence. The future should not be illegal...

From transport to mobility

"People talk about the Netflix of mobility, which has to be easy, personal and suited to the user's experience," insisted Francisco Javier Rodríguez, manager of transformation and digital innovation at Renfe, which handles 480 million trips every year and accounts for 80% of electric public transport. From a transport operator to a mobility operator.

Rodríguez: "People talk about the Netflix of mobility, which has to be easy, personal and suited to the user's experience"

Mobility is global, but it is also urban and between cities. "Zaragoza would not be Zaragoza without an AVE high-speed train," he pointed out. What better than the hand held out for dialogue: "It is impossible to understand a mobility initiative as a service without the public administration, what is most difficult for all of us is to cooperate and we should eliminate the resistance to sharing data." 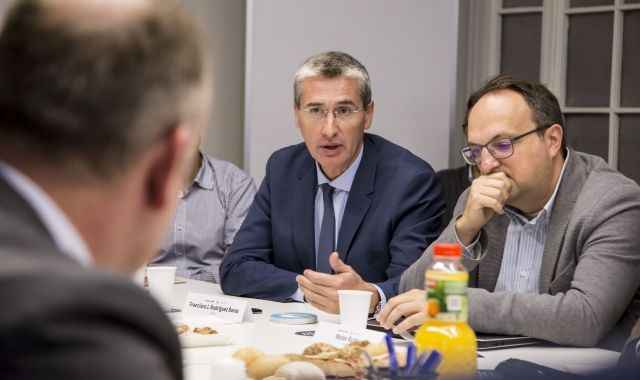 "Cities can lead these changes but the private sector has to get involved. However, the war will be about who becomes the platform... We won't have 40 applications and Netflix ceases to exist," argued Ugo Valent, director of Fira de Barcelona's Sal Smart City.

For his part, the director of innovation projects at RACC, Miquel Roca, who also supports mobility as a service, argues that "if the new mobility is to save our future, we have to begin democratising it." A genuine exercise in simplification and homogenisation to reach even more people.

The CEO of SocialCar, Mar Alarcón, pointed out that cooperation is still in a Beta phase and the key to the new mobility is down to the public administration: "We need it to be the real engine of regulatory change and for it to convince people of the need to develop cities. The mobility of the future in this country could go the way of renewables in 2010."

Alarcón: "If two or three platforms lead mobility it will be bad news"

However, Alarcón has it clear that "if two or three platforms lead mobility it will be bad news." In his opinion, the Netflix model does not serve for cross-cooperation between local platforms. 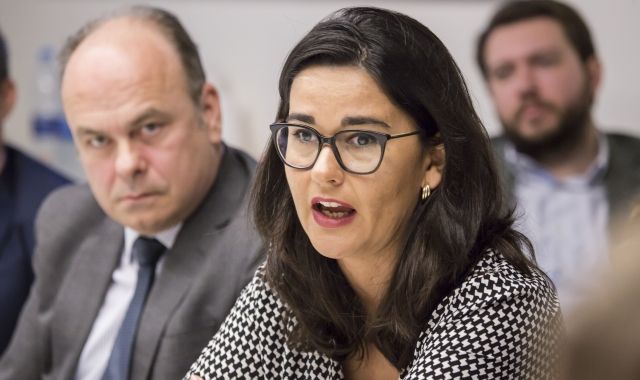 "Data should be a public infrastructure, like water or transport," pointed out Francesca Bria, Barcelona City Council's commissioner of Technology and Digital Innovation, in an interview with VIA Empresa coinciding with the Smart City Expo World Congress held in the Catalan capital.

Armengol: "There has been an ideological appropriation of certain means of transport"

Right and left, in (un)equal parts are also part of the mobility race. According to Armengol, "there has been an ideological appropriation of certain means of transport." Yet, fortunately, we are already making the change in mentality for bicycles that go towards the left and cars towards the right.

"There is no going back, we are all changing to mobility service," points out Joan Palacin, Business Unit Director Automotive Antennas (Ficosa). As an example, he explained that Denver is the largest smart city in the world thanks to public-private cooperation and it has raised some 72 million dollars, about 63 million euros, of funding in only five years.

The managing director of Factor Energia, Emili Rousaud, anticipates that the promotion of the electric vehicle infrastructure will go along with the impulse towards self-consumption: "mobility will principally be electric and the infrastructure will be done in parallel." New generations and new values far from private property will also play a key role.

Rousaud: "Mobility will principally be electric and the infrastructure will be done in parallel"

Jokingly, a guru of the Massachusetts Institute of Technology (MIT), Nicholas Negroponte, wondered in front of his students: "What is the difference between you and your children. Your driving licence." The prognosis is clear: In 2030 driving will no longer be necessary and artificial intelligence will get its driving licence early.

According to Rousaud, "the tradition of finishing your degree and buying a car no longer exists. The struggle is for climate change and sustainability." In fact, Factor Energia will invest up to 14 million euros from 2019 in different recharging points mostly in Catalonia and Madrid. "Every family's second vehicle will be electric," he predicted.

Plugged into the shared vehicle

"The alliance of the battery in Europe is arriving a little late," warns Armengol. The head of Expoelectric, Ramon Caus, has heeded the warning and proposed taking advantage of the fact that our cars are parked to store energy in the face of closure of thermal and nuclear power plants.

Changing subject, Caus explained that "the shared vehicle will not be shared with another person but with another company." At the same time, he denied that the public charging infrastructure will be used very much because electric cars are charged in parking places and have a range of 300 kilometres, with 500 or 600 kilometre ranges to come soon.

Garriga: "The future is buying a vehicle without a battery

and then leasing the batteries"

"The community has an obligation to accept that it must put an electric socket in the garage," added Rousaud. Nevertheless, the head of communication at Scutum, Carla Garriga, predicts that "the future is buying a vehicle without a battery and then leasing the batteries." "On our platform there are a lot of people who lease their cars," adds the head of marketing for Drivy, Luca de Bofarull, who also shares a car.

Along the same lines, Palacin pointed out that Samsung, LG and Panasonic, which are the three large battery providers, cannot keep up with the demand. "Europe cannot afford not to control technology and energy sources; we have to get organised and join forces," he says.

The case of Aigües de Barcelona is significant: its fleet is electric and works on green energy to the point that it has managed to reduce its carbon footprint by 18%. "We have installed air pollution sensors, which monitor air pollution in real time," explained Bernat Rovira, Aigües head for the Barcelona area. 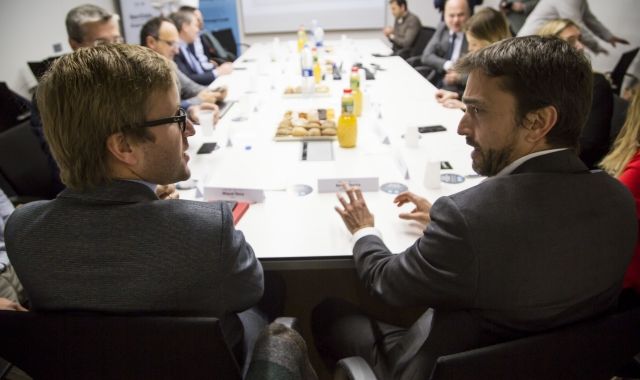 The CEO of Ellas Deciden and contributor to VIA Empresa, Gemma Cernuda, took advantage of the occasion to carry out a small survey among those present, drawing the following conclusion: a third of the executives present get around the city by electric car, scooter or motorbike. "Younger people share cars," she adds.

For the past six months, the electrical appliance chain, Mir, has sold more electric scooters than computers. That is according to Mir's CEO, Matteo Buzzi, who in an interview with VIA Empresa said that "the traditional electrical appliance shops will suffer and so we have opted for urban mobility." However, he also admitted that one of his main concerns is safety. Who knows if it could provide a new opportunity for RACC.

The world has changed: the oil of the 21st century is data, auto-manufacturers are not thinking about selling cars but kilometres, and everyone wants smart and sustainable cities. Private-public cooperation apart, the question is to be Netflix or not to be Netflix. "However, careful, Netflix has to be paid for and there are a lot of people who are not willing to pay" so that "if you don't pay, you are the client." Let everyone choose the mobility they prefer.